We have just repealed the galaxy ban after consideration from the community. With a 12-0 vote on the Discord, we discussed how new galaxies should be permitted. Follow the steps below if you wish to create a new galaxy:

One: You must give a reasoning and explanation to the unique themes and setting your galaxy has, and what it brings to the Universe that isn't in another galaxy already.

Two: Any subsequent galaxies created must remain the sphere of your first galaxy.

Three: You are limited to at most five galaxies in said sphere.

Four: Submissions for galaxies must be created on the discord to be evaluated.

Five: Subsequent galaxies should not be created unless an author gives previous ones an established theme and storyline.

Also, be mindful of any lore concerns that a new galaxy may cause. Since it is a galaxy after all, it could effect politics, stories, cultures, and much more. Additionally, the largest galaxy (Aylothn) was decided a while ago so please do not make anything larger than it. With that said, let the creation begin.

Glad the ban was lifted, I have a couple questions:

Will the universe map on the lore page be changed to add galaxies? Will there be a max limit? It is only a galactic neighborhood after all. Will galaxies be removed if they are kept empty?

Also, I have the same question as frew, how will users without discord evaluate it? Perhaps through the discussion page?

We are considering using the chats here for those not on the discord. Also, yes, the galaxy map will be changed to reflect the new galaxies. We will not immediately delete empty galaxies, we will allow for a lot of time to fill them up (heck, some of my galaxies are still empty because I haven't had many ideas for them lol).

Will the universe map on the lore page be changed to add galaxies?

Of course! Just tell us where you would like it.

Will there be a max limit?

Probably, though a max probably wouldn't be reached at all in my eyes. We don't get too too many editors and galaxies take a very long time to get full.

Will galaxies be removed if they are kept empty?

Yes, though this requires a long time of inactivity (multiple months) and they can be brought back at any time.

How will users without discord evaluate it? Perhaps through the discussion page?

If one doesn't wish to use discord, they can chat with any of the staff (Me, LordSkorne7, Duodecillionare, CosmicSmoothie, Alejojojo6) and we can look at a request. I can make an announcement about this update as well. 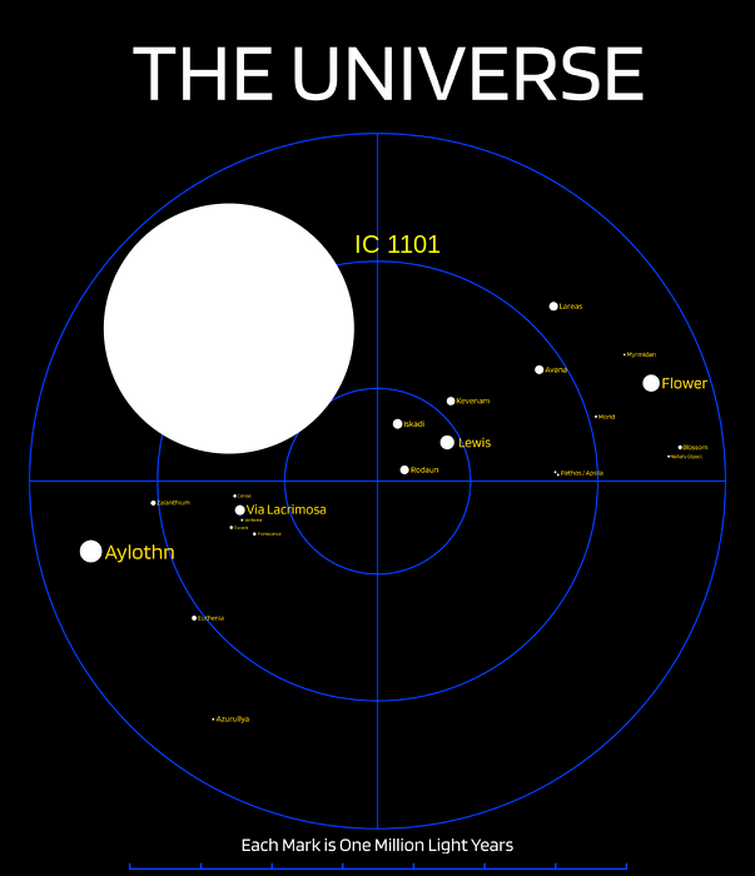 What have you done! If IC1101 was in this wiki, there would likely be no night on any planet!

It would probably be even bigger though. but I would have run out of space

Yeah, if it was too scale.

What do you think?