Civilizations that have held control of areas in region:

Amoeni Space is a region of space containing three galaxies and a lot of empty space. It is partially severed from the rest of the universe, making Amoeni Space the most isolated area of the known Cosmos.

Amoeni Space formed along with the rest of the Universe in Comsic Primordia. However, unfortunately, a tiny flaw in the singularity resulted in a catastrophic space-time re-organisation that resulted in Amoeni Space being slightly cut off from the Universe. Light makes it through, but it is slowed down to half its speed. Any form of matter is immediately so cold that its atoms form an Bose-Einstein condensate, making normal sub-space travel along the border of Amoeni Space impossible. Something else also happens, which is still a mystery today. The border seems to be able to rip electrons from their atoms, making any matter that crosses the border into a soup of radiation and electrons. Three newly-forming galaxies were trapped inside this bubble of distorted space-time - the Eulciar, Lance and Tarmalyula Galaxies.

In the ancient era, thing happened. We don't know exactly what things happened, we just know that they did. At least two great empires arose and then fell, but they only conquered Amoeni Space because the border was to energetic and tumultuous to allow anything to cross over it.

When the Mors Omnium Event occurred, its energies managed to wipe out all sentient life in the entire of Amoeni Space. It reduced all life in the region to naught but memories rendering it utterly silent for the first time in billions of years.

After the Aeternum Event, Amoeni was silent. Eulciar began forming massive stars which rapidly went supernova, rendering life impossible, Lance was getting old and Tarmalyula was empty. This lasted a billion years, until on a unknown world known only as The Utopia arose. The Utopia spread out, colonising the entire of Amoeni Space, seeding thousands of worlds with life, and having the most Utopianist culture and society that we know of. Their nation slowly dissolved as their citizens ran out of things to do and committed suicide to see what death felt like. Quadrillions died each day, worse than any major war as this new "Suicide Fad" ran its course. After it was over there was less than 0.01% of the original population left, and the nation collapsed.

On the thousands of worlds were The Utopia seeded life, sentience emerged. By this time, the Eulciar Galaxy had calmed down, and Tarmalyula was no longer the echoing tomb that it was before. Life sprung up again, which leads us into the Current Era.

As of today, Amoeni Space is a bustling vibrant place to be. Wars and Peace are balanced in equal measure, as are the rich and poor, as is most other things.

The Eulciar Union of Nations is the most powerful force in Amoeni Space as of now, uniting most of the Eulciar Galaxy.

Amoeni Space contains three galaxies: the Eulciar, Lance and Tarmalyula Galaxies. Apart from these, it contains an estimated 2 billion rogue stars and a lot of empty space. 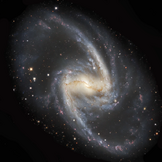 The Tarmalyula Galaxy is the largest galaxy in Amoeni Space, containing 693 billion stars. In its swirling mists lies wars and peace, life and death, rich and poor.

Tarmalyula has numerous stellar nations, each claiming paramount position over the mists of the Galaxy of War.

The Lance Galaxy is the closest satellite to Tarmalyula, slowly getting ripped apart by Tarmalyula. Lance is a old, metal-poor galaxy that has seen thousands of civilizations come and go. It is the smallest galaxy in Amoeni, containing only 754 million stars.

Eulciar is arguably the centre of civilization in Amoeni. It hosts the Eulciar Union of Nations, a supra-governmental organisation that governs three-fifths of the entire galaxy.

In its 5 billion stars, many civilizations have arisen and fallen. Among these are: