Just a bit of tweaking...

Birran is a white supergiant star in the Florathel Galaxy, around 450 light years from Carlea. It belongs to the Birran-Rarga association, a small, young star cluster easily visible from Carlea and the surrounding areas. Birran is mostly known for being one of the brightest stars Carleans laid their hands on early on in their spacefaring activities.

Birran is a very large star, with a radius over 130 times that of the Sun and over 350 times that of Maea. Birran is also quite massive, having over 18 Solar Masses, and being born with around 20.5. It was born as a rare O type star. Unlike O-type stars, Birran is cool compared to them. It has a temperature of around 8600 Kelvins, and is classified as a white supergiant. Birran is very much evolved, far from the main sequence and well into its giant phase. It is in fact going through a blue loop and will become a red supergiant again in around 220,000 years.

Early in the history of the Cnara-Frealee Federation, Birran was reached and colonised. Some of its original planets were disassembled to create an important dyson sphere, which would allow them to tap into almost 700 times the energy available Raea. Progress on this dyson sphere was slow at first, but soon it it became very quick and after a few decades the main part of the dyson sphere was completed. Then, an idea started to sweep the public of the Cnara-Frealee Federation - building a Matrioshka brain which could power many computer simulations and create a virtually identical online copy of the real universe. It was an exciting prospect.

In 55881 CE, construction started on what would become the first Matrioshka brain made by the Cnara-Frealee Federation. The excitement for this was so high that after only 14 years, it was finished. Soon, many billions of minds were uploaded in the virtual reality. This was a testament to the growing federation's potential.

Birran formed a mere 17.6 million years ago, in what is now the Birran-Rarga association, inside the Enralka nebula, a small H II region and the closest of such to Carlea. It formed much like any other star, beginning as a very large Bok Globule and condensing to form the Birranian protostar 17 million years ago. It was a dull red, giant ball of gas which was still compressing, and then, 2 million years later, sparked into life as an O9V star. Birran was the first star to form in the Birran-Rarga association.

Soon after its formation, Birran's system started producing planets. Birran's harsh stellar wind was fortunately not strong enough to prevent this, and 3 planets were formed. They has since been disassembled to make the matrioshka brain

Around 3 million years ago, Birran started to evolve off the main sequence. It started to expand and cool, but also brighten and lose mass. This was because the star had exhausted most of the hydrogen in its core, and its core contracted and heated up, forcing the outer layers to expand. It became a blue-white supergiant and then a small red supergiant. Birran stayed this way for a while, but then around 300,000 years ago, it experienced a blue loop and the entire star was literally on fire. Birran shrank down into a yellow hypergiant and then almost immediately to a white supergiant, and this is where it is today. Soon, Birran will become a red supergiant again.

Birran is located in the Birran-Rarga Association and Enralka Nebula. As such, there are a reasonable number of high-mass stars located near it, which have also been colonized by the Cnara-Frealee Federation.

Rarga is a high-mass O-type main sequence star and the second most massive member of the Birran-Rarga Association. It is incredibly hot, and a matrioshka brain is under construction here as well. Rarga is also the only major star of the Association to have a planet orbiting it, the gas giant Terith. Terith is probably a captured rogue planet, as it is believed that no star of this mass could reasonably form planets in-situ.

Nerejak is an extreme oddity. It is the closest example of a Keligan Star to Carlea, and as such none have been at all close to it. Nerejak is also among the brightest Keligan Stars currently catalogued, and of course has no planets.

Tairei is a red supergiant star within the Birran-Rarga Association. It has no planets, and is highly active, with huge flares erupting out of the surface of the star. Tairei is a classic example of a red supergiant and the most well-known in the CFF. It is currently being starlifted to reduce its mass from supernova levels. 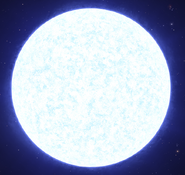 Rarga in all its glory 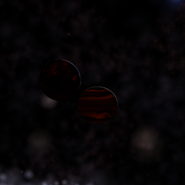 Terith and its moon Vestra

Nerejak from as close as one can get to it 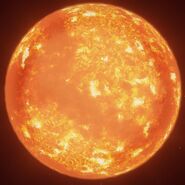 Tairei from up close
Community content is available under CC-BY-SA unless otherwise noted.
Advertisement