Carlea has a static-lid crust, leading to a relatively flat seafloor, with no trenches or anything. This means that the continents don't move around the crust, unlike tectonically active planets. However, large portions of crust have been shoved upward creating two large contients, Reana and Porania. Each of these continents contains massive populations, filled with trillions of Carleans and other species, living in tall arcologies.

These two continents are divided by a vast ocean with no real way to split it up into multiple oceans, so it's just called "Carlea's Ocean". This ocean is filled with hundreds of islands of varying sizes, from tiny spits of sand barely poking above the water to vast islands almost continents in their own right. 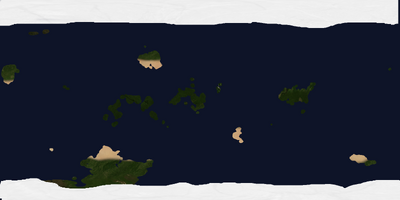 Interestingly, most of the planet is covered in forests, and the deserts are being artificially cooled down and terraformed. Along with the endless forests, Carlea is covered with taigas, large snow-capped mountain ranges, frozen wastelands (not much of them anymore though), small deserts, a few regions of arid badlands, and a few swamps near the coasts.

Reana is the equatorial continent of Carlea, containing many species of life and is mostly covered in tropical rainforest. The continent is partially submerged, with only ~fifty percent of its land area protruding above water. Reana is home to many coral reefs, and is thus the most biodiverse continent on Carlea.

Reana is home to the city of Larenna, the most populous city of the planet. Larenna is a floating city hovering over the rainforests of the continent, to avoid disturbing the fragile ecosystem there.

The Targa Archipelago is an archipelago filled with many islands, which are set aside as a nature preserve. It has many species of animals and plants found nowhere else on the planet, including the Pyre Frogtrap, a carnivorous plant that looks like an alarmingly large jaw, capable of eating animals as large as frogs. The carnivorous plants here evolved because of the low soil quality (it's actually sand), which required extra nutrition to allow the plants to grow and reproduce.

The Aalles Rainforest spans the eastern above-water portion of the continent, and has many many types of plants, some of which remain uncatalogued to this day. It contains both the rainiest place on Carlea and the place where lightning strikes most often, Lake Marelaka. Some Carleans have chosen to live in this rainforest in small huts suspended from the vast trees.

The Rainforest contains massive trees in excess of 400 meters tall, and a small portion of the rainforest has a massive collection of buildings suspended from the massive branches. This city is relatively primitive, as it has to make sure not to damage the trees upon which it is built.

The Zelles Rainforest is a rainforest on the western above-water portion of the continent, and it is relatively similar to the Aales Rainforest. It has many unique species and is the most biodiverse region of the planet. On the eastern shore of the rainforest, there is a space elevator port, which was placed twelve kilometers offshore.

The Alatara Desert is the driest portion of the planet, on the southwestern shore of the northern above-water portion of the continent of Reana. It is caused by a rain-shadow effect caused by the Pellot Mountains, which block water vapor carried on the wind from reaching the location of the desert. There are some places in the desert which haven't seen rain in all of recorded history.

The extreme conditions of the desert necessitate similarly extreme species there. One species lives in the relatively wetter regions of the desert and can live for over eleven years without a single drop of water. Another lives on the shoreline and digs trenches to guide water into a drinking trough. However, there aren't very many species that live here.

The Pellot Mountains are extinct volcanoes caused by a roving hotspot breaking through the crust. They are the highest mountains on Carlea, and are the anchor of another space elevator. They aren't very biologically diverse, but a few species have managed to gain footholds there.

Porania is the southern and least populated continent of Carlea, and is mainly covered in dry forest and savannah. Porania only has one major city, Arkos, off the northern coast of the continent.

The Salapar Forests are the most ecologically diverse area of Porania, filled with various sorts of birds and other plant and animal life. The forests are home to one or two uncontacted Carlean tribes, meaning that travel is restricted due to the possibility of disease spreading. Uniquely for such a populated planet, most of these forests are not well-explored.

The Anacreon Savannah is a hot, dry, but still quite biodiverse region of Carlea, with many species of large animals populating the endless grasses. It is quite dry, but there are many rivers, lakes, and seasonal waterholes here, which allow animals, and even lonely Carleans, to survive and even thrive here. The trees are relatively sparse and widely spaced, and are often quite tall to avoid their leaves being eaten by foraging animals.

The Letza Ice Cap is the coldest portion of Carlea, covered in kilometers of ice. Almost nothing lives here due to its extreme lack of precipitation. The Letza Ice Cap is home to the Great Dry Valleys, a series of snowless valleys deep in the center of the ice cap that have not seen a single drop of rain for millions of years.

However, many lakes lie hidden deep beneath the ice, with very interesting fauna adapted to the complete and utter blackness beneath kilometers of ice. 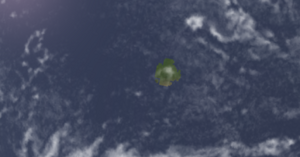 Alerus Island is a medium-sized island in the middle of the ocean. It is mostly covered in a small forest, surrounded by beaches. Because of the island's remoteness to landmasses, the island has many unique species from millions of years apart from the rest of the world, and has a population of only a dozen Carleans studying the unique native fauna.

The lake also has eleven mysterious thin obsidian spires almost three kilometers in height spiking out of the center of the lake, which are unexplained to this day. Because of the spires' height, many plants have found a way to grow up the spires to collect large amounts of light from above the everpresent cloud cover.

Carlea has a rather varied climate, with each portion of the planet having its own unique climate. Like most temperate worlds, its climate is mainly varied depending on latitude with some areas creating hot deserts and others creating patches of frozen wasteland.

Most of the landmasses are covered in temperate forests filled with endless types of flora and fauna, not all of which are even documented yet. However, the north and south poles are covered with large ice caps where only the hardiest life-forms of Carlea can survive.

The atmosphere on Carlea has a composition of 69.8% Molecular Nitrogen, 25.1% Molecular Oxygen, 1.2% Argon, and trace amounts of other elements, including carbon dioxide, ozone, and an abnormally large amount of noble gases than was expected from it's location in the system. It's biosphere has altered the atmospheric composition in several ways: Firstly, 1.4 Billion years ago, Photosynthesis was developed, releasing an insane amount of oxygen into the air, rendering most ancient anaerobic species extinct, and over millions of years after that, indirectly creating an ozone layer that protects life on land by deflecting or absorbing lethal ultraviolet radiation, which is admittedly pretty rare in the Cnara System anyway. Aside from this, the thickness of the atmosphere protects surface life from most asteroids, that could otherwise destroy large areas of land.

Retrieved from "https://100th-millennium.fandom.com/wiki/Carlea/Geography?oldid=64313"
Community content is available under CC-BY-SA unless otherwise noted.