325 currently extant sapient species (more now than every before in the past at once).

Throughout its history, ~1000 species have naturally formed into civilizations, 120 were given civilization, and 15 are in the process of becoming civilizations.

Cosmoria, also known as the Endless Expanse or Reality (formerly known as "The Universe" although this title is still common), is a vast Structural Realm comprising over 99% of known space. As a structural realm, Cosmoria exists within a baseline reality not dependent on any lower realms or planes to support it. In other words, Cosmoria is the lowest region of space in its vicinity with other realms "built" on top of it. Cosmoria is considered to be a naturalistic realm, meaning that it was not created and is not maintained by a conscious force, although many believe this to be so.

Because of its massive size, it has never been fully mapped, and there are vast regions of space that are almost completely unmapped. Most of its civilizations, activity, and population lives within structures known as "galaxies," dense conglomerations of stars and dust. Roughly ten percent of stars within Cosmoria are extragalactic, making them very remote and very difficult to reach or map. Cosmoria has somewhat strict laws of physics with the only exceptions derived from its interaction with other planes. 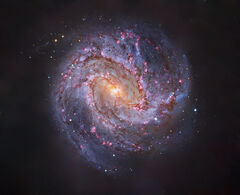 Florathel is the largest galaxy in Cosmoria, housing 1.1 trillion stars and numerous civilizations. As one of the most life-bearing galaxies, Florathel has some 65 sapient species. Some consider it to be a barred spiral, but the bar is so subtle that it might as well not be there. Notably, Florathel is the home galaxy of the United Nations of the Florathel Galaxy, one of the most prominent forces in the entire Universe. The extreme distance of Flower to other galaxies means that it is very difficult for extra galactic nations to colonize it, and the only extragalactic colony in modern history was rapidly abandoned due to unreasonably long transit times. 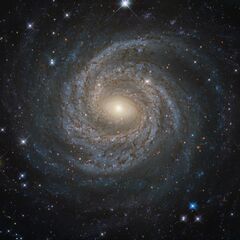 The Lewis Galaxy Galaxy is a large barred spiral galaxy with about one trillion stars. As the second largest galaxy in the universe, the Lewis Galaxy Galaxy is the center of a region of space known as Herschel Space. The galaxy is unique in being almost entirely tamed, with little space in the galaxy left wild or unclaimed. It is one of the most populated by Humans, having one of the highest concentrations of humans in the known universe, surpassing even the home region of Humanity around Aegyn. 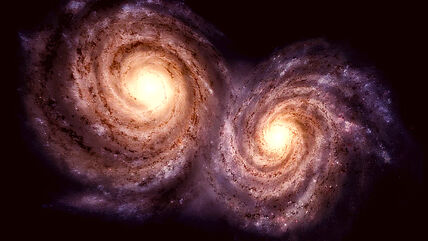 Nilus is amongst one of the most famed galaxies in the cosmos, due to its incredible appearance. Nilus is technically three galaxies in the process of combining. Even so, they are often considered one galaxy, making Nilus the third largest galaxy in Cosmoria. The nations within the three currently colliding galaxies experience contested scenarios amongst each other due to their recent neighbors being closer than ever. As Nilus collides, star-formation rates will increase, eventually making life much rarer in these galaxies due to increased radiation levels. For now, Nilus is about as life-bearing as other places. 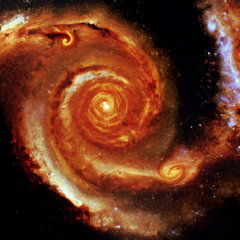 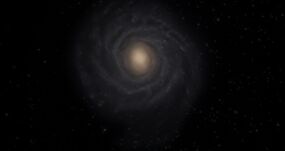 The Tarmalyula is a spiral galaxy located close to Namegi, in Amoeni Space. It is a beautiful galaxy, but sadly is in a age of war and destruction. Many nations are trying to conquer it, but none have succeeded. It has a very low number of large stars, most being ripped away along with its nebulae 4 billion years ago, when it came dangerously close to its companion Namegi. 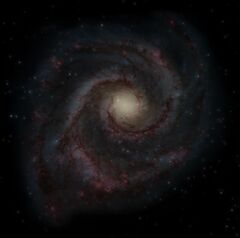 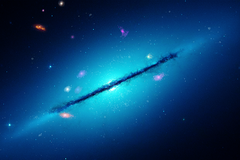 Azurullya is one of the smallest galaxies in the Universe. While small, it possesses a very distinctive ringed shape and a deep cerulean hue. Under the control of the Theocracy of Silverstar, the galaxy has flourished and grown into a cohesive empire, despite only possessing three native sapient species. A large majority of the population are the descendants of immigrants from the older major empires. Azurullya, despite its distance from Via Aylathiya, is technically a satellite of that galaxy, even if Aylathiya's gravitational influence on it is minimal at most. Even though Aylathiya's gravitational influence on Azurullya is weak, its cultural influence is most certainly not, with its largest civilizations all deriving their identities from cultures found in Via Aylathiya.

The Beginning of Time & The First Galaxies

Approximately 10-37 seconds after the beginning of time, cosmic inflation began, causing energy to expand with the Cosmic Primordia. Because of this, temperatures dropped by a factor of 100,000. Quantum fluctuations in the chaos before the Cosmic Primordia were thus amplified into overdensities that would gravitationally collapse into the first galaxies after expansion finished. Around 10-36 seconds, the electroweak epoch begins as the strong nuclear force becomes distinguished from the other forces.

Inflation suddenly stopped dead at around 10-33 seconds, after the universe increased in volume by a factor of at least 1078. At this point, the production of a quark-gluon plasma as well as other elementary particles began. Temperatures were so ludicrous that ever particle moved at ultra-relativistic speeds. At some point, a process scientists call baryogengesis began, causing a very tiny excess of quarks and leptons over their antimatter counterparts, which resulted in the dominance of matter over antimatter in the present universe.

After this, things stopped changing as quickly as expansion began slowing. Symmetry-breaking phase transitions put the fundamental forces of physics and the parameters of the elementary particles of the universe into their present form, with the weak force and EM force becoming distinguished at ~10-12 seconds. At around 10-6 seconds, quarks and gluons combined to form particles like protons and neutrons. As the temperature dropped enough to prohibit new particle-antiparticle pairs, the split between them "froze out", and a massive annihilation event followed, leaving only 1 in thirty million matter baryons behind. A similar process happened around 1 second later for electrons and positrons. After this event, the remaining particles were no longer moving relativistically.

A few minutes later, by which point the universal background temperature was ~1,000,000,000 K and the density of the universe was comparable to a standard atmospheric density, neutrons combined with protons to form the universe's deuterium and helium nuclei in what is known as Primordial Nucleosynthesis. Most protons did not combine and became normal hydrogen nuclei. Thus began the Opaque Era.

After 380,000 years, the electrons and nuclei combined into atoms (mostly hydrogen) which allowed light to pass through, ending the endless scattering of photons in an event known as the Last Scattering.

Over a very long period of time, the slightly denser regions created by inflation begun a process of gravitational collapse. This density attracted nearby matter and thus grew even denser. This process culminated 500 million years later with the formation of the first stars. These stars were upwards of five times more massive than the largest of modern stars, and that is an average. These stars exploded in tremendous hypernovae soon afterwards, creating the seeds for the first supermassive black holes.

These black holes consumed huge amounts of gas, ballooning to vast sizes. It was around them that the initial set of roughly seventy small galaxies coalesced around 12 billion years ago. These galaxies collided over the next billion years to create roughly the modern set of galaxies, with a few exceptions. These galaxies were uninhabitable because of the huge rate of star formation which irradiated the entire universe at this time. However, roughly 11.5 billion years ago, the star formation rate had slowed and the first life evolved.

The earliest life could have formed in the entire universe was somewhere around 11.5 billion years ago. It is assumed that life would first emerge sometime after then. Of course, given how long ago this is, any evidence of this ancient life is entirely lost.

Life would not be able to advance much beyond simple single-celled life-forms, genetic material and cellular processes remaining simple in the heavier-element poor universe. By 10 billion years ago, at least some of this simple life would evolved to the multicellular stage, and within another billion years become sapient. This life would go on to create the first civilizations in history. Most evidence for these is concentrated in Florathel, where the first ever confirmed civilization existed in the outer Frealee Arm.

These civilizations were quite small. However, they would get bigger. Just under seven billion years ago, the warring tribes of the Lareas were unified under a single ruler. He then embarked on a great conquest, massively expanding his territory as the technology of the civilization increased. Just after they had conquered the entire universe, the only civilization in all of the history of the universe to do so, they began tinkering with time.

Experiments of the Lareas Alliance culminated in an attempt to create a time bubble around an entire star. The formation of the time-warp bubble permanently sealed off the system from the rest of the universe, and from the outside the star appeared to expand into a red giant and promptly collapse into a white dwarf after just three seconds. But few would witness this event, for in causing it, all in Lareas Alliance were reduced to naught but cosmic ashes as a bubble of some form of lethal radiation expanded outwards at the speed of light. This radiation instantly killed all it came into contact with and was completely unstoppable. In approximately ten million years it had crossed the universe. After that point, the universe was utterly lifeless.

There was a single exception to this. The Telmarai Cluster was ejected from Florathel several million years previously as a secret hideout for Lareas Alliance's thinktank of the universe's best scientists. These scientists noticed the sudden shutoff of communications within the bubble, and designed an extremely complex shield around the entire cluster. At this point, it was approximately two million light-years beyond the edge of the Universe, and when the radiation hit it was completely neutralized. As such, the Cluster is the only known location in the universe with life older than seven billion years.

After the Aeternum Event, the universe was lifeless for the first time in billions of years. Bacterial life reemerged soon after on whatever habitable planets that were not stripped of atmospheres in the Aeternum event, mostly in Via Aylathiya on the other side of Cosmoria. One notable example was Verelas in Avana, which gave birth to the Verelas Civilization only 1 billion years after the Aeternum Event. This is the first known civilization to come into being after the Event, although it was soon followed by others.Notable civilizations which came into being soon after the demise of Lareas Alliance include the Kelnor Empire, the Kaumann Empire, the D'Naevium Civilization and others. These nations are not well known, but they were followed soon afterwards by some of the giants of ancient history.

Around 2-1 billion years ago, a set of large civilizations came into being. The two largest examples are the Trans-Yggdrasil Civilization and the Providence Union. Of the two, the Providence Union is the one about which the most is known, due to the suspiciously convenient existence of the Glanadi Archives. The Providence Union died an incredibly violent death as all of its major worlds were destroyed by unharvested Penrose Spheres.