Eydafrei
Ejeunor (Ee-jay-you-nor), also known as the Motherlode, the Auriferous Helix or Little Aylathiya, is a small dwarf galaxy orbiting closely to Via Aylathiya. It is mostly governed by the prosperous Shev'ra nation, founded by the thriving Shevin species of Eydafrei.

The galaxy radiates a bright golden glow of thousands upon thousands of stars within its borders. 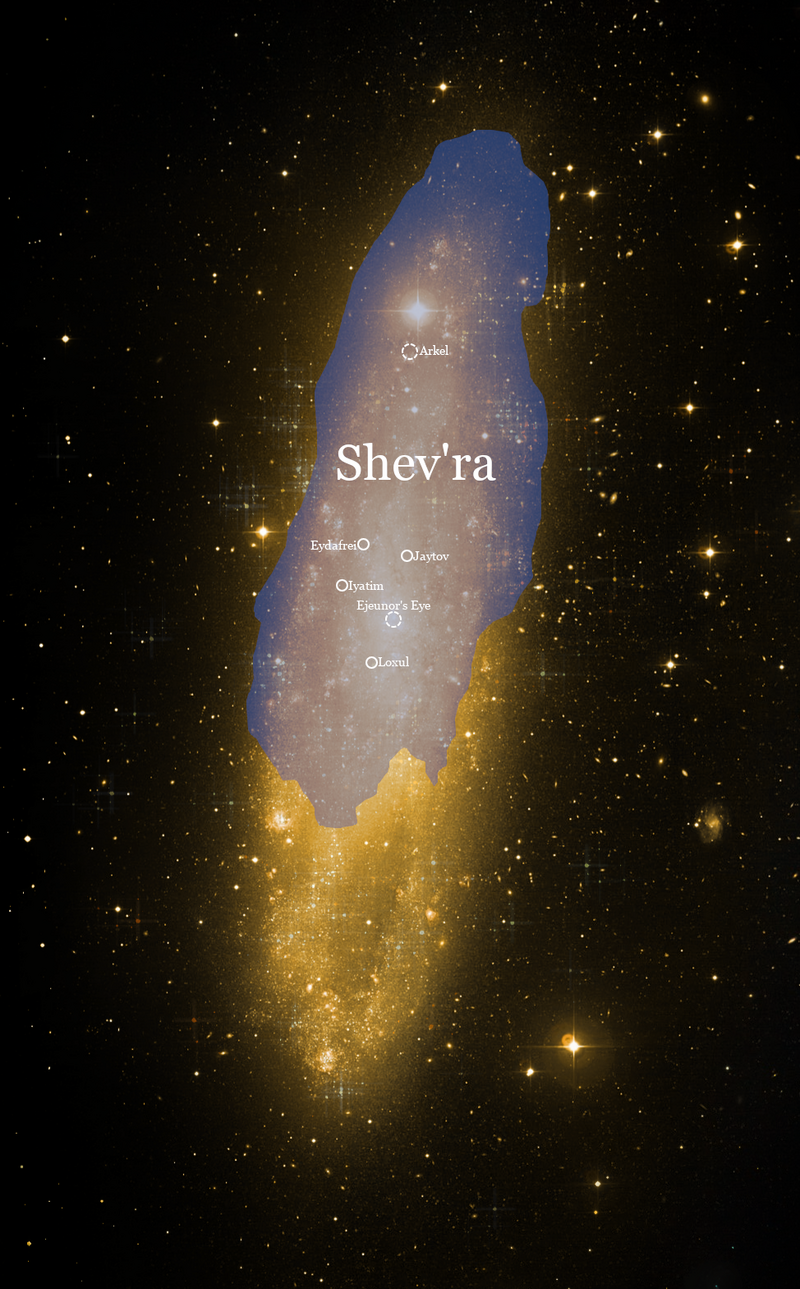 Despite its fairly small size, multiple civilisations call this galaxy home, with a number of interesting lifeforms within its golden glow.

The noble, curious and bountiful race of the Shevins, founder of the near galaxy-wide Shev'ra and arguably its most prominent species. Having arose on the idyllic world of Eydafrei, they have mastered both the land and the heavens with their technology and curious nature.

Having arisen on the swampy world of Jaytov, the Querna are, contrary to the splendorous Shevins, quite a reclusive race, only communicating every so often w[ith other species for trade.

A spaceborne race, the Esk are vaguely molluskan with silicon based shells and exoskeleton, fitted with FTL tech that allows them to individually travel to other systems. The Esk are quite plentiful within Ejeunor's golden glow, and are indeed one of the more intriguing of the galaxy's residents.

A crystalline race native to the exotic moon of Iyatim near the core. The Kaettr can best be described as looking like a clump of crystals, and despite their simple appearance, are highly intelligent, even older than the Shevins. They are extremophiles, and can survive in airless environments for several hours.

An ancient, long forgotten race who are believed to have seeded of Ejeunor's worlds with life, including Eydafrei. Not much is known about the Hyu, what they looked like or their culture/society although they're believed to responsible for the creation of the Orachis-Kenna Path, among other oddities. They traversed space in large, cuboid-shaped ships.

The central back hole of the galaxy.

The star cluster surrounding the central black hole, it shines with a brilliant radiance that can be viewed from all corners of the galaxy. Shevin regions often saw it as Ejeunor's eye or heart, hence its modern name.

It is also the location of the Orachis-Kenna Path, as well as other oddities. Aside from those, fhe cluster itself mostly consists of giant, dying stars and is filled with cosmic radiation, making life a rarity in its clutches.

The diverse, life-filled homeworld of the Shevins and capital of the prosperous Shev'ra, Eydafrei is considered a very important planet both in and even outside Ejeunor. It is a course of pilgrimage for all Shevins and a centre of trade within their nati. on.

Homeworld of the crystalline Kaettr species, Iyatim is an interesting place, with its crystal-based life and colourful, hydrocarbon seas. All over, crystalline forests permeate much of the landscape under a pink-ish sky, inspiring many with their gorgeous appearance.

A rogue planet, considered the "homeworld" of the Esk, although they're not actually native to it. If functionally serves as a trade centre as well as a nursery for Esk to raise their young. Although it lacks a star, the Esk are able to see perfectly fine there due to their flexible vision.

Though not much is known of its prehistory, it is believed to have once been part of a larger galaxy that was subsumed by Via Aylathiya as evident by it's close orbit. It is believed that shortly after this occurred, a mysterious species referred to as the Hyu, conquered the remnant galaxy and created the famed Orachis-Kenna Path. Shortly after this, the Providence Union came through the wormhole and attempted to conquer the Ejeunor Galaxy, but were rebuffed, as their political power was waning at the time.

As far as historical records are concerned, Ejeunor was fairly quiet for some time with no major civilisations until 3058, when the emerging Shev'ra started to sprawl amongst the aurulent sea of stars.

In 5391, the UFSS colonized the first of their planets within the galaxy.

Ejeunor is often described as being somewhere that peace prevails, however, that notion was challenged by the eventual war between the Shevins and the Kawins. A war that would change the galaxy forever.

The most notable systems/planets in this galaxy are: