This page is being recreated from an older version. Contact the reformer if this does not happen after a while.

Feres (also nicknamed "The Metal Sun") is the parent star of Artaclate, capital system of the Marakat Interstellar Union, and a small and bizarre type of star known as a Frozen Star. Located in the Inner Elerad Arm, Feres formed with so much metals that it became more of a giant planet than a star. It is powered by both nuclear fusion and radioactive decay in its searing core. However, Feres is a very cool star with a surface temperature of just 308 degrees Kelvin. As a result, it is given the spectral classification of H7. It is one of only 33 documented frozen stars in the Florathel Galaxy.

Feres has been a hotspot for scientists of all backgrounds, who have come to study the star. The second planet, Gerbi, has been placed under environmental protection to preserve its fragile and exotic ecosystem. Feres is also the parent star of the exceedingly famous planet Artaclate, which outshines the fame of the rest of the system a hundredfold, and many maps refer to the system as the Artaclate System, although inhabitants of the system, including of Artaclate itself, strongly discourage this.

The Feres System contains four worlds, Konae, Gerbi, Artaclate, and Eriest. Eriest is significantly more distant than the other three, and Konae, Gerbi, and Artaclate orbit in a so-called "Laplace Resonance". Between Artaclate and Eriest lies a vast belt of habitation structures formed out of the asteroids formerly residing there. Because of the Feres System's small size, not that much can be said about its arrangement. 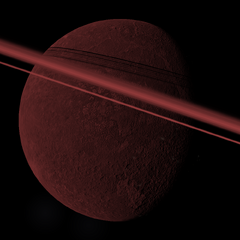 Konae is the innermost planet in the Feres System, and is a cold, tidally locked icy world with a thin atmosphere. It has a subglacial ocean and frequent tectonic activity from tidal heating from Feres and the other three planets. Konae does not have a large population and was mostly disassembled to construct the starlifting mechanism, and most no longer consider it a planet. 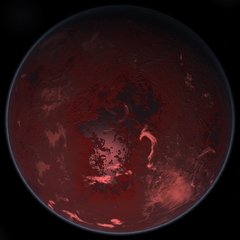 The second of the four planets, Gerbi is a small planet only slightly larger than Konae. Due to being so cold, it has seas of liquid neon. Gerbi has huge, exotic ecosystems of carbon-based life that rely on neon as a solvent. Because of this, Gerbi has been placed under environmental protection and not a single individual has set foot on the planet to avoid contaminating this unique ecosystem. 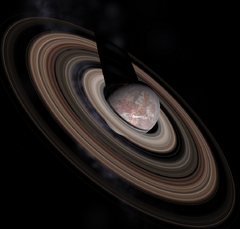 The third planet, Artaclate is unique. It was the homeworld of the Poreltids, and is now the capital of the Marakat Interstellar Union. The MIU government has converted the planet into a so-called Matrioshka world, with almost a quadrillion inhabitants, allowed by an interesting process of shunting infrared radiation into an artificial black hole at the center of the planet.

Artaclate is exceedingly important across the Florathel Galaxy, and its fame outshines the entirety of the rest of the system. The system is often marked on maps as simply "Artaclate", showing how unimportant the rest of the system is. The planet has significantly increased in size from the several dozen matrioshka shells piled atop the planet's original surface, with most of the core being mined out and replaced with an artificial black hole carefully stabilized in the center of the planet, where heat is shunted in.

Artaclate has a large set of rings, considered a national treasure by the people of the MIU and carefully maintained to keep their beauty across the eons. 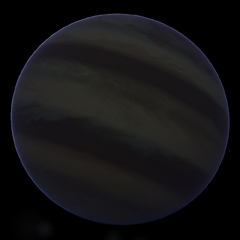 Eriest is the final planet of Feres and a small gas dwarf with one very prominent band. Eriest is tidally locked, and there is a permanent storm raging on the side facing Feres. When the band runs through it, it is disturbed and creates a number of smaller storms. Eriest is extremely cold and looks orange, with neon and hydrogen clouds and neon rain. Because of its distance to Feres, Eriest has a tiny population, and is largely ignored, even by inhabitants of the system.