30h 16m
Glanadi is a cold ice planet, the only planet of the red dwarf Glajidon in the Providence Neutral Zone in the Florathel Galaxy. It is under the monitoring of the UNFG, whose drones are under directive to find any planet inhabited by multicellular life.

The CBRPD's drones, while exploring the vast cave systems, have found apparently abandoned cities deep beneath the ice. Dating of material shows that these cities were originally created in the Providence Union Era, over 1.5 billion years ago, and that this planet was one of the first colonized by the Union. However, the city seems to have been abandoned many years before the Fall, which spared it from destruction. however, before they left, they accidentally left behind some bacteria, which has evolved over the years into advanced and complex life.

The unique pristineness of the Providence artifacts make this planet a gold mine for information about this little-known civilization.

Glanadi is rather small compared to its field of similar worlds, having very little gravitational pull. It has no moon, nor water, yet it's underglacial biomes manage to ensure development of lifeforms. It's small axial tilt ensures no seasons, yet it doesn't have sufficient surface biomes to benefit from anything like that.

Glanadi's star is one of the closest stars to The Heart of Providence to still have planets, which means that the evolution of its native life is sped up significantly by mutations introduced by the radiation from the black hole's jets.

Glanadi is home to a strange wormlike species which seems to be developing tools, and the civilizations of the Florathel Galaxy have sent many small drones beneath the ice shell to study them and attempt to learn how they communicate. However, the drones' sound detectors have failed to detect any form of communication, although the worms seem to emit light patterns, and this is hypothesized to be their communication method.

The Glanadi Archives are by far the most important thing on this planet, the Archives take the form of a huge computer system that has sat dormant for almost a billion years since the fall of the providence union. Due to its position deep underground in a specially sterilized chamber, most of the computer is still functioning, and scientists have drilled into its chamber to extract data from it. This computer is the most reliable source of information on the Providence Union Era, and without it modern scientists would know very little about the Providence Union as a whole.

The Archives seem to contain information about virtually everything known to the Providence Union, and scientists are working to copy all of it into a modern computer before it decays. Due to this, tourists are forbidden on the planet, as researchers are worried they will destroy the delicate computer systems. The Archives are considered to be the most important of the artifacts of the Providence Union, so even actual researchers must go through a thorough vetting process to be allowed to even enter the planet's hill sphere.

Glanadi's lifeforms are not as sluggish as one may conclude. They can be very fast and can skillfully dash and maneuver through the differently sized tunnels and rooms. Meanwhile the immobile organisms don't linger behind - the seeds may have forms that allow them to be discarded quite far and some plants will even trap some of the animals that fly into them. Due to the very low gravitational pull, lots of creatures will rather "swim" through the tunnels, however some still manage to scuttle as if they were walking due to having a kind of an exoskeleton to them.

Glanadi has a large number of moons, all of which are captured asteroids. Due to its position near the inner edge of the Gladijon Asteroid Belt, it has had ample opportunity to capture them. As the modern colonists didn't bother to make up names, all of the names of the asteroids are taken from the Glanadi Archives. A full list of moons is found below:

Unlike their parent, these moons do not appear to have anything of any interest on them. 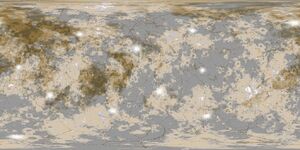 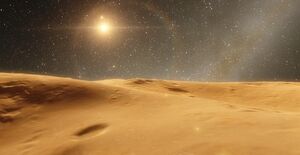 Although the environment is cool, Glajidon provers a decent amount of light to surface. 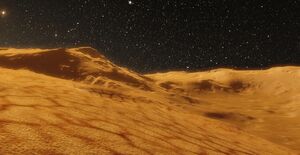 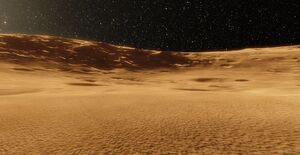 Crater walls are important as lifeforms prefer tunnels that are more elevated from planet's surface. 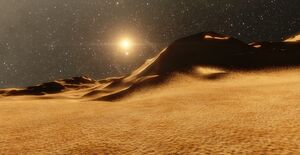