Lore is the essential backstory and explanations for all items on the 100th Millennium Wiki, as it exists throughout almost all articles and tales. Lore exists in numerous forms, which can be explained as such:

Lore is segmented into two main categories as well. These are called Standard Lore and Auxiliary Lore. An explanation of them is below:

Standard Lore: Standard Lore consists of the major articles that are irrefutably canon. This form of of lore generally makes up the bulk of wiki's content. Major nations, wars, and some stories usually take place in Standard Lore. Standard Lore must not contradict any other standard lore.

There exists a third category one may see on the wiki called Legacy Lore. This is simply lore that used to meet quality standards but no longer does. Most of which were written before large wiki changes. The articles in this category are in the process of either being removed or remade. If the original authors see no use in updating the page, or have otherwise left the site, you may take these for yourself. They are essentially "fair game" and can be remade by anyone willing to make them fit to the modern lore.

The 100th Millennium Wiki is contained in an area, simply named The Universe, an assemblage of galaxies located within a supervoid named the Void of Creation. In the beginning ages, it was settled and colonized by various ancient empires, and it has since sprouted with an endless amount of known and unknown life, stretching to nearly every corner of every galaxy. Over the rise of modern-day nations, a continuous age of relative peace mixed with brutal wars has been initiated. What sits now is a multitude of various empires, deep interconnected alliances, and vast confederacies which unite even the most distant of nations. 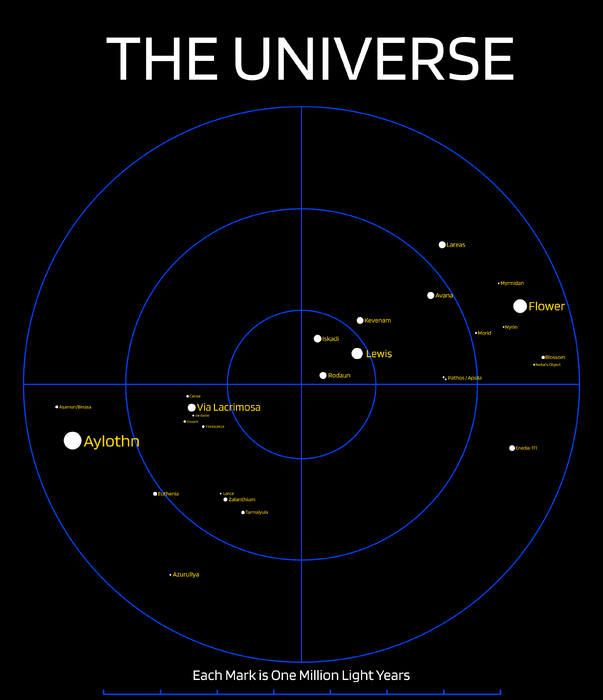 For the sake of cohesion on the 100th Millennium Wiki, timekeeping is generally done in real-life years, as to not confuse any writers and to keep a sense of scale. Measurements are also done in the Metric System, though any writer may include measurements from the Imperial System in () parentheses if they desire. The measurements of light years and AU are also the exact same as real life.

In the Kardashev Equation, the only variable you need to know is "P", which stands for a civilization's power usage. Power usage is usually found out by multiplying the number of stars in a nation by 10^26. (The same can be said for galaxies, with 10^36, though this isn't recommended) For example, a nation with 80 star systems under its full influence would have a value of be 80e+26. This is a reasonable number for energy usage. For the number above, the civilization type would be 2.190. There are slight bends to the scale however, as a nation is able to have more energy than the number of stars in its borders. Vice versa may also apply under the discretion of a nation's editor.

Rather than plugging in the numbers directly into the equation yourself, you can put this number in the "P" section in this website After this, you should be ready to use the Kardashev Scale. If you need any more help, you can easily contact us with Discord.

Type 3 Civilizations range from Type 3.000 and above, consuming from 10^36 watts of power and over. (Nations above the Confederacy of Borealis and the Commonwealth will not be created.)

This wiki, partially delving into the depths of science fiction, utilizes various faster-than-light technologies to keep these massive interstellar nations afloat. Most of the time, Exotic Matter is utilized for the creation and utilization of FTL technology. The most common kinds of FTL technology are as follows:

Warp Drive - One of the first FTL inventions to become widespread across the Aylothn-Sagittaria Group. It uses a simple 'Alcubierre Drive' to let ships traverse short distances. It has since become a very standard form of warp technology.

Electric Field Drive - An old form of FTL technology, which uses the field of exotic matter to 'catch' Tachyons and propel starships on a 'Tachyon Sail'. These work very effectively in Hyperlanes.

Hyperlane - A long thin tunnel which is cleared of debris and harmful objects. This allows many kinds of FTL drives to go above their usual 'speed' and capacity.

Wormhole - Arguably the most frequently used form of non-conventional FTL, the Wormhole is one of the most iconic inventions created by the nations of the Local Universe. Continual wormhole gateways also allow for near-instant communication across major colonies.

SICTIRIAD - Via complex processes involving deforming the universe to produce a “sub universe”, (called an STB) a starship can take advantage of the different curvatures to accelerate travel time by reducing distance between two points, temporarily leaving the main universe in the process, making them virtually undetectable until exiting. During this period, the ship has little interference with travel as well as a slighter spacetime curvature and can thus travel at much faster speeds between points with much higher precision for exit locations. The range limit is approximately ten kilo-light-years.

Quantum Shift Drive - A unique form of superluminal travel unique to the Palioxis Starfield. This device operates by propelling a spacecraft to an alternate plane where distances are smaller, therefore making interstellar travel exceedingly rapid.

It is generally good practice to try to mesh one's lore with others. The discord server is perfect for communicating ideas. Deep lore connection is not required, but it generally improves the quality of the article, especially its history and sections of lore.

The 100th Millennium Wiki takes place in a universe based on science fantasy rather than science fiction or any of its 'hard' types. Many things in the universe are very much impossible with our current understandings of science, and that's okay! The exact amount of science realism in an article is up to the article writer themselves. The only hard rules are the conservation of mass and energy as well as the rule that entropy is always increasing. Apart from that, any appropriate magic, technology, or power is allowed.

Size limits allow for every civilization to fit into the existing galaxies. There is no hard-set maximum size for a civilization, however, one should be mindful of other nations within a galaxy and adjust the size of a nation accordingly. If the nation does not need to be a sprawling empire of billions of stars then it does not have to be. "Small" civilizations are just as welcomed and can be just as detailed as any of the large ones.

Time travel is allowed as long as it abides by the Novikov Self-Consistency Principle (Don't worry if you don't know what this is, time travel is very niche for the story anyways).

There exist no de-facto "God" or "Gods" in the 100th Millennium Wiki, with the Universe being created by a series of "Forces". However, supernatural entities are more than permitted, so long as they are not ludicrously powerful. (This is usually judged by readers and content relative to surrounding lore) A general rule is that no individual entity is to hold a ludicrous/generally disagreed amount of power after judgement by the community.

In the 100th Millennium Wiki, there is only one physical infinite universe. The universe itself exists in a large, endless void. Alternate Planes, which may be confused for alternate dimensions or alternate universes, are acceptable as long as there is general community/staff approval.

Thaumaturgy is the main "magic system" on the wiki. Most supernatural abilities stem from it. There are three classes of Thaumaturgy, which will be explained below:

Classical Thaumaturgy is based entirely on one's consciousness and beings relying on a naturally-sized brain will have limits; limits that usually manifest themselves as taking very, very long time periods to gain planetary-level power. Artificial beings may also have psychokinetic abilities, though they are notoriously hard to manufacture. Workarounds include lack of control, situational power (meaning they can be quite powerful but only in certain situations), requiring some kind of payment to activate their abilities, etc. Classical Thaumaturgy has six 'sects', which are based loosely around the fundamental forces of reality.

Runic Thaumaturgy is a form of thaumaturgy in which power is not drawn from another plane such as Classical Thaumaturgy, but an individual known as a Patron. Individuals seeking to draw energy from a patron usually must carry out a series of steps generally referred to as a "ritual." Complicated Ritual-based Thaumaturgy is rare, however. Much more often is the ritual in the form of what are known as Runes. These runes allow for users to channel the energy of a patron and convert it into various forms if the Runic System is advanced enough to accommodate energy change.