Nisrine War
The Nisrine Collective (Often referred to as The Collective) is a cyberocratic technocracy located in the vicinity of the Nisrine Cloud. It is widely known for being one of the most recently created nations in the Aylothn Galaxy. The Collective is otherwise known for its very turbulent history, as well as its uniquity in its government, society, and power. Currently, The Collective is entirely operated by an artificial superintelligence, named the Nisrine Mind. It has its operations stationed on a vast megastructure named Nisrine. Nisrine also acts as the current capital of The Collective, and is where a large number of the population resides.

The Nisrine Collective was first born out of an event named the Samutan Reformation. A now fallen nation, named the Samutan Galactic Faction (SGF), came to power after revolting against the Uspayador Plutocracy of Etheaunsk in 90,075 CE. Through ways of force and attempted sterilizations, the SGF gained a high level of power in their local sector. However, a sterilization of a species dubbed as Nisranians upset the Nisrine Mind, which deeply cared for its former citizens. A conflict named the Nisrine War took place not long after, and the SGF was crippled in a short timespan. To avenge the dead and ensure safety, the Nisrine Mind created a nation, which is what The Collective represents today.

As a result of the Nisrine War, The Collective has taken charge of the old SGF territory. It has since cleared the area of debris, seeded life on numerous worlds, and built megastructures at blistering speed. The Collective has also provided for the remaining people, granting them worlds where they may flourish like the Nisranians used to. It has since become one of the most developed nations of all time, with its borders flourishing with a new era of prosperity, unlike most others in the Holara Hinterlands. Expansion has also been quick, resulting in The Collective being one of the largest nations in its area.

The population for the Nisrine Collective is immense, with 1.3 octillion people seeking refuge in its territory. By no means is it the greatest though, as the Thulcandran Federation is by far the densest nation in the Holara Hinterlands. Even so, the Nisrine Collective is not to be underestimated, as there exist a countless amount of defenses and surveillance. A network of automated military assets is more than prevalent as well, with large starships piloted by the Nisrine Mind being able to defend the nation from total warfare. It is the rather large population, the density of structures, and the might of the military which has upheld The Collective through its history.

Relations with other nations has been cordial to say the least. The Collective, primarily viewing other nations as potential allies, has partnered up with many. Examples are the Commonwealth of United Economic Nations, the Quintet Puontari Federation, the Thulcandran Federation, and the Sovereign Provinces of Holara. These partnerships have resulted in the Collective becoming a very influential entity within the Aylothn Galaxy. It has also resulted in a high level of trade, immigration, and wealth between The Collective and these nations.

The Nisrine Collective holds numerous points of interest, in the forms of megastructures, planets, stations, and historical sites. These dot its area heavily, focusing to the center of the Nisrine Cloud. They are all connected through a system of wormhole gateways and Hyperlanes. Ever since their downfall after the Nisrine War, these worlds have been reonstructed by the Collective. The process of reconstruction has revitalized many worlds, which have since been used as centers for population. This has reformed them to become not only famous places of tourism, but as military, economic, and trade capitals.

Nisrine is the largest economic trade center throughout the entire Nisrine Cloud. It was named in honor of the original Nisrine, which initially held the Nisrine Mind. Ever since the Nisrine War, the Collective began constructing Nisrine as a Matryoshka Brain. It would serve as a center for processing power and population. After construction, Nisrine would fill with numerous people, typically ones who were recovering from war. It would later grow according to the needs of the population, becoming what it is today. Much of the Nisrine Mind resides in the servers of Nisrine to this day. 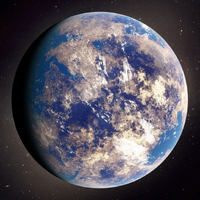