"Palioxis is a truly exotic realm, the reality of which is beyond our mere minds. This, merely the nature of this harsh reality, should not deter us from gazing in awe at its unparalleled sights. Palioxis is truly something special, apart from any other realm. Oh, the days when it made me contemplate reality and doubt the laws of nature itself. Palioxis, the very embodiment of instability, forever holds a special place in my heart."

Singularia
Aeron Authority
Ever since the Palioxis' birth countless eons ago, its sights have remained unrivaled across the vastness of the Cosmos. The by-product of a great collision between a pair of fundamentally clashing realms, an intrinsically fragile state permeates across its breadth, in which the laws of nature have begun to loosen their grip on reality. Such progression has ultimately culminated in a series of universal concepts thriving as the ruling force of Palioxis.

The majority of Palioxis transpires within the Aeshai, uniform pockets of isolated realities spread across an everlasting cosmic void.

On the verge of a great bloodbath, Palioxis' civilizations exist on a fine line between peace and destruction, a state so fragile it can be tipped over in an instant. Resting in the shadows of the realm's ancient rulers, the Greater Celestial Concord acts as a unifying force across the entire Palioxis, the most illustrious attempt at stellar unification there has ever been. Nonetheless, chaos and hate native to the core have begun to creep into the void, corrupting its overall serene and harmonious nations from the inside. Despite this, void-hailing civilizations remain relatively stabilized, one of the greatest forces to be reckoned with.

Chaos-ridden empires born in the core vigorously make their way through deep space to one day reach their path to paradise, yet constant infighting has halted this more than a hundred times. Astonishingly, this everlasting conflict has lessened in the past few millennia, as unity forces its way to the heart of chaos. Several disorderly civilizations have begun to enforce their claims further than ever before, a process of attempted unity. Perceived to be under this rising threat, paradise civilizations have begun pursuing diplomatic relations with several void nations, as well as expanding their combat capabilities, ready to hold their ground against any threat, known or unknown.

The cosmological state of Palioxis represents a force of order which permeates its vast expanses. While the cosmology of similar realms such as Cosmoria can be described as a solid, Palioxis' space is more akin to a fluid, in that it is in a constantly flowing and alternating state. Hundreds of diverse types of astronomical bodies exist in harmony with each other, yet a great amount reside in a state of everlasting turmoil.

The complete history of Palioxis is too complex to be concisely explained in any coherent manner whatsoever. Nonetheless, by piecing together clues left behind by ancient civilizations, a short chronology can be pieced together. The millions of years are divided into four distinctive eras, separated by the state of the realm, named by ancient Verthas words. 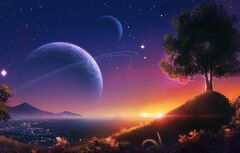 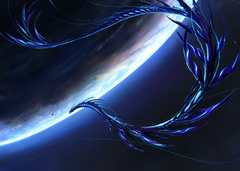 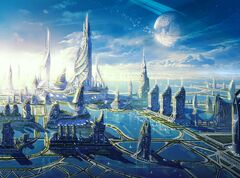