Before, we had quarrels and differences between humeigas but today, all humeigas are gathered together as in a big family and respect each other. Long live peace and long prosperity to humeigaity. (Sabeusna Atès, leader at the time when all nations of Aureiga are merge with Regnum Aureiga, 10/06/17,092 BCE)

Regnum Aureiga or Regnum del Aureiga is an oligarchic great power in Via Aylathiya. It has a relatively low population yet retains a high economic output. It has sovereignty over 10.782 billion stars, one third of which not being usually populated, but rather acted as outposts. Its capital is Aureiga.

Regnum Aureiga is a oligarchs directed by a Director to which his mandate lasts 20 years period. The Director is voted by eligible citizen. There also a Prime Minister, ministers of military, ecologist, production, space, sciences, education, transports and diplomacy, designate by the leader. In addition, each colonies have a Governor, choice by inhabitants eligible of the colonies.

The Capitol on Zàlepar on Aureiga is the place where laws are voted by 500 deputies in proportional mode and is also the residence of the leader.

Deputies are choice by the parties where the deputies belongs a party.

The nation is directed by a Director to which his mandate lasts 20 years period. The main function is to represent the Regnum Aureiga to the other nation for made diplomatic action with some help with minister of diplomacy. The Director can't apply laws - except in a crisis - but can if he want ask to remade a election for deputies one time during him mandate. The official residence of the leader is the Capitol on Zàlepar on Aureiga.

The actual leader, Quarus Aminatius, govern the kingdom since 23 years with 2 mandates.

To become a eligible citizen, the citizen need to have a minimum of 10,000 C-Unit.

This kingdom prohibited terraformation in its controlled systems, but can have domed cities and some habitats in orbit.

There are five majors political parties:

The last 1% are the influence of minors political parties.

Here are the map of main galaxies where Regnum Aureiga is established. 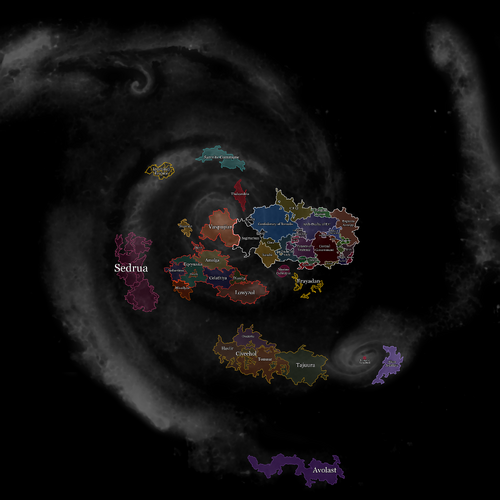 Regnum Aureiga has many major worlds, all of which are designated as high priority worlds. Many of them include many of the nation's industrial and economic centers with densely populated cities while trying to conserve nature.

Regnum Aureiga was formed in multiple step by a succession of nations merge to her.

The prequel was in 18,298 BCE by the merge of nations on the the continent Kàleip on Aureiga planet (Regnum de Zàlepar, Regnum de Leipurn and Regnum de Kàleiro) to form the Regnum de Kàleip, to be prepare in case of a defensive war by Reignyre de Zìu on the Zìa continent. The merge was already in question before that because all this nations were a similar cultural and political system, but was not sure to choice the main nation before was decide all citizens vote to choice (the result was Zàlepar).

The war was ended on 17,945 BCE where the number of humeiga life lost during the war is around 4,000,000 in both side, where 30% are from Regnum Aureiga. It was won with the advance of science of Regnum de Kàleip with the collaboration of Rémyk del Aurzìa and also in number because there was more population. Reignyre de Zìu was defeat and be annex by winners. Regnum de Kàleip by the occasion be proclame Regnum Aureiga.

When the nation of Remyk de Zìa join Regnum Aureiga some centuries after the war in 17,826 BCE, the Capitole on Zàlepar for the occasion was started to be build, where laws are voted and hosts the Director.

In 10/06/17,092 BCE, Sabeusna Atès, leader at the time, impose to cities states to be a vassal of Regnum Aureiga with nuclear deterrence, and some days after, by fear, other nations ask to be merge also. The official goal was to avoid a another war by a fanatic nation.

When all the planet are control by Regnum Aureiga, the science progress start to become more faster:

After that, colonization of space begin and Regnum Aureiga start to become a nation spatial...

When Regnum Aureiga become a type I civilization in 16,610 BCE, them start to colonize their neighbor worlds.

In 15,362 BCE, the kingdom meet Humans and also Triumvirate Civilization after cross the wormhole from their native system connected to Aegyn. Regnum Aureiga became a state of Triumvirate. Also, Humans and Humeiga to have a alternative name for their species because there are very similar. So the nation choice Sabeiga in honor to Sabeusna Atès to him species.

In 15,343 BCE, with data collected during the travel of the wormhole, the nation can travel to 4kc. This data are send also to Humans and Triumvirate. Some years after that, the nation start to explore and create some colonies outside of their home system. Zèya on Lyos System, away around 105 ly of Melyos System, is the first colony found on a world like Aureiga, created in 15,325 BCE.

In the meantime, just before the war, the nation was developed the possibility to travel by temporary wormhole and become a type II civilization thanks to the energy exploitation of their star.

After the crisis happen, Regnum Aureiga meeting the Un'oit Collective in 456 CE, but the kingdom prefer to be neutral after the violence of the previous war.

In 4,206 CE, Regnum Aureiga have the surprise to meeting to The Rorran Intendancy, a extra-galactic nations who have some colonies in Via Aylathiya. Some millennia after, it is the turn of Florenta to be discoveries with same properties.

In 25,009 CE, the nation decide to made a alliance with United Federation of Star Systems when is create, to re-increase the relation between Humeiga and Humans.

In 29,913 CE, the kingdom start to colonize Namegi Galaxy, where the first is Sabeusna on Atès System. It is a system Humeiga first found by a wormhole in Via Aylathiya and made a test of travel temporary wormhole from Aureiga to this system with success. In the same time, the kingdom meeting Namegi Coalition who ask to keep the system neutral. For avoid a war, the nation accept.

In 30,801 CE, Regnum Aureiga accept to be a associated nation of Confederacy of Borealis instead of directly a member ship to keep independence, but Boreal Basic become the third official language in the nation.

In 34,071 CE, Regnum Aureiga ended the occupation to Un'oit Collective.

United Nations of Tiafe became a protectorate of Regnum Aureiga in 89,375 CE.

Noyminod del Auyen is a dominion of Regnum Aureiga created in 13,105 CE after the First Galactic War. It was an area of Un'oit Collective that Regnum Aureiga annexed near Erstes Konsortium to keep a influence in this galactic area.