Rhione is a temperate habitable world governed by the Commonwealth of Golr're. It was the first world ever colonised by them.

Rhione was a rocky world, with a atmosphere of around 0.24 atm and a surface temperature of -19 degrees before the terraforming team came in a terraformed it to become suitable to Golr'ren life. They rained down comets and water-ice asteroids on the surface, releasing gasses that thickened the atmosohere and increased the temperature, which in turn flooded the surface. Once this stage had settled down, what was left was a world with a atmosphere of hydrogen, sulphur dioxide and carbon dioxide, with a pressure of 1.82 atm. This was suitable for the most hardy of Golr'ren life, which they then seeded the planet with. This transmutated the atmosphere into something breathable by higher forms of life, and the world of Rhione was born.

The Rhionian Culture is orientated in a honour-in-battle type way, with citizens participating in regular mock-battles, some lasting days. Fatalities are rare, but one must be prepared for pain. This is why most Rione-born people have scars or cuts from recent or old battles.

Aside from the battles, the music of Rhione is renounded throughout the commonwealth, or even the galaxy. The music often is orientated around honour and battles, but another common theme is love or the beauty of the lanscape. 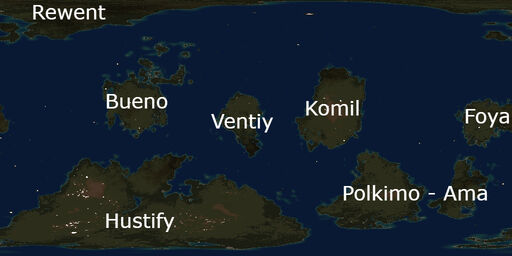 Rewent is the northernmost continent, and the coldest. It is covered in snow-resistant trees and cold-temperature grasses, making the continent appear green when it should be white with snow and ice.

Beauno is a tropical continent, and the most populated. It holds the seat of government for the planet in Ejilkenbeng, the capital city of the planet.

Ventiy is almost a uncolonized continent, with most of it area being untamed wilderness and forests.