High
Saleas is the second planet in the Parvo-Aa System located in the Florathel Galaxy. It is an icy world that has been partially melted by the increasing heat of Parvo-Aa, a red giant star. It is the homeworld of the Salakela species and serves as the capital of the Economic Federation of Saleas.

Saleas is the Salakela word for "home", and its original name by the extinct Corvelmar of Coros is unknown. It is a planet that initially seems barren on the surface, but is in fact teeming with life beneath the partially melted ice shell.

It is one of the most important worlds in the whole of the modern history of the Florathel Galaxy, as it is the capital world of the Economic Federation of Saleas, the second largest nation in the galaxy. It was also a major colony of one of the most influential species of the ancient Providence Union, the Corvelmar species. The Corvelmar would break away from the Union shortly before the fall, and would thus be spared from its events. However, they later destroyed themselves in war a few thousand years later.

Saleas was not always in its present state. For the vast majority of its history, it orbited the gas giant Virelask as its largest moon, and was entirely covered in thick ice, its surface a vacuum. It was later aquaformed by the Corvelmar in an attempt to create living space for them, before they were conquered by the Providence Union. After the fall of the providence union and the Corvelmar's destruction in war, Saleas froze over again, and sometime in the interim, a close encounter with another moon of Virelask ejected it from the gas giant's orbit. As Parvo-Aa aged, it brightened, eventually becoming a red subgiant, bringing Saleas within its habitable zone and causing the melting of much of the ice shell surrounding the planet's subsurface ocean.

It would later serve as the homeworld of the Salakela species, which would later break through the ice and colonize much of their portion of the galaxy. Saleas has served as the capital of the Economic Federation of Saleas ever since its founding. As such, it has the highest proportion of Salakela of any planet in the whole of the Florathel Galaxy.

Due to its importance to the Salakela, many wars have been waged over control of the planet between various factions of the Salakela. However, so far no secession movement has been successful. The Economic Federation of Saleas was a part of many of the major wars in the Florathel Galaxy, including the War of Saiheran Succession, and unfortunately the planet was nearly rendered uninhabitable during the Sack of Saleas.

Saleas is located in the center of the Parvo-Aa sector, a region of the Frealee Arm comprising the nearest five hundred systems to Saleas.

This area of space is filled with many habitable worlds and life forms, with around thirty percent of stars in the sector having at least one world with native life. They may have been seeded by the Corvelmar, but this is unknown.

The Corvelmar are the first species to colonize Saleas. They came from the planet Coros, the currently innermost planet in the Parvo-Aa system, then a lush world of forests and oceans, now a sunblasted, dead world with little to no atmosphere. Looking somewhat like large spiders, the Corvelmar would conquer the entirety of their now-dead homeworld and colonize the then-icy moon of Saleas. Saleas, orbiting the gas giant Virelask at the time, had many neighbors and was effectively the second capital of the state of Corvelmus, the Corvelmar's state within the Providence Union and later the name of their nation. However, after wiping themselves out in war a few thousand years after the fall of the Providence Union, Saleas would freeze over, but the primitive bacteria accidentally seeded in the ocean of Saleas would evolve to become the Salakela.

The bacteria that the Corvelmar accidentally seeded Saleas with eventually evolved into the Salakela, a cephalopodal species which would construct endless catacombs throughout the seafloor and eventually creating vast glass towers in the ocean of the planet, some even rising above the surface between chunks of ice. The Salakela would conquer the whole of Saleas, then its moons, then the rest of the system, before expanding into the greater Florathel Galaxy. The Salakela would eventually found the Economic Federation of Saleas, the second most powerful nation in the galaxy, and become one of the most influential species of the United Nations of the Florathel Galaxy.

Heleas is the largest moon of Saleas, and the largest moon of any object relative to its parent planet. Like Saleas itself, Heleas is an icy world which is slowly beginning to melt. Unlike Saleas, it has only just been seeded with life, and as such it has only bacterial life forms native to it. Towers similar to those on its parent world have been constructed within the oceans of Heleas as well, vastly increasing its population.

When it first formed, it orbited the gas giant Virelask, in a position near Saleas itself. However, when Saleas was ejected, it took Heleas with it, allowing its tidally heated subsurface ocean to be sustained. Just as Saleas did, when Parvo-Aa became a red giant its icy crust began to melt, making colonization much easier.

Heleas now has a dense population of roughly 4 billion Salakela, despite its small size. Also, because of their closeness in size, Saleas and Heleas are in a "double tidal lock", meaning that one face of Heleas is perpetually pointed toward another face of Saleas. The Salakela have constructed a space elevator between the planets to take advantage of this.

Paea is the first dwarf moon of Saleas and its second natural satellite. Paea was captured from the asteroid belt of the Parvo-Aa system after Saleas' ejection from Virelask, alongside its sister moon Fras, and is composed mainly of rock. Paea is roughly thirty kilometers in radius, and is pocked with various pits and craters.

The moon contains the colony of Ceraxes, a massive underground colony which burrows all the way through the moon and is filled in with water. Ceraxes has a population of roughly eight hundred thousand individuals, and homes and businesses are anchored to each other and expand upward toward the center of Ceraxes in vast structures which appear to be made of glass.

Fras is the final natural satellite of Saleas. Significantly smaller than its sister moon of Paea, Fras is dense, composed mainly of iron and other heavy metals. Because of this, the population is relatively small, with the mining installations being manned by robots. Despite this, Fras is home to the colony known as "Dance of the Spheres", because of the famously beautiful views of the Saleas and Heleas dancing around each other. Dance of the Spheres is a major tourist attraction for the Saleas System. 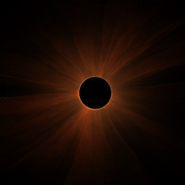 The jagged border between the remnants of the ice sheet and the cool water.

A medium-sized hole over the northern pole section of the ice sheet. Verik Tower is anchored to the seabed beneath it.

One of the long cracks through the ice sheet. Draxel Tower is located here.

An image of the edge of the melting ice from a drone.
Community content is available under CC-BY-SA unless otherwise noted.
Advertisement