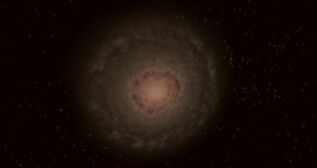 The Tarmalyula Galaxy is a spiral galaxy, though it exhibits characteristics of both lenticular and elliptical galaxies. It has multiple arms, all quite small, and empty.

At the very centre of the galaxy, there is a immensely large white hole, constantly spewing out gases and light. Most of it is ejected out from the poles, creating the powerful jets spewing up and down from the galaxy. In these streams, new stars are constantly forming in the stream, making it look like the hole is spewing out living stars.

It is these stars that are the most prised possession of the nations of Tarmalyula, as they usually have many planets, ranging from 8 to 25 planets. The Free Nation, People's Republic of F'omol and Commonwealth of Golr're all arose around these 'rich stars'

There are many star clusters that have been ejected from the galaxy, making a 'halo' sphere around the galaxy. These are very rich in metals, making them have a abnormally large amount of planets for this galaxy. The most notable of these clusters is the Aurora Cluster, which houses the planet Aurora, as well as its star. This cluster is the centre of the Democratic Commonwealth of Aurora, with its most valuable colonies and megastructures.

Another is the N'omaa Cluster, which is rather a mystery. It is only visible at specific times of the year, and that time changes. On top of that, the stars that make it up as well as their positions change regularly, again, without any pattern.

The Primordial Age encompasses the formation of the galaxy, and the emergence of the first life in the galaxy.

The Tarmalyula Galaxy formed from the same material that formed all other galaxies in the universe. It formed as a normal spiral galaxy, albeit slightly small compared to its neighbours. The first life to arise in the galaxy was the Remone, who are still around today.

The Remone, parasitic sentient organisms that can inhabit and 'drive' any carbon-based organism, arose on a long-destroyed planet around 9 billion years ago. They conquered and enslaved the entire of the Termalyula, Zalanthium, and Lance, and most and quite of lot of a lot of other galaxies nearby. They built a slave-empire, subjugating all species that came in their way, and grew to be a multi-galactic nation. They were feared throughout the universe. Then they fell.

After just two-hundred and thirty-nine million years of constant subjugation, war, terror and death, the remaining species of the universe, banded together into a large, supra-galactic organisation. This was the beginning of the first Mirror War. The then Aylothn and Via Lacrimosa galaxies, as well as the majority of Herschel Space became a battleground for the moral right of any species to exist. Finally, after many millions of years of fighting, which decimated most of the known universe, the Remone were subjugated and controlled on one planet, a uninhabitable world by the name of Roj'laka. Due to its hostility, the remaining Remone used pre-sapient lifeforms (dogs, cats, horses, etc.) to survive, but they were forced to migrate out of the path of incoming storms and heat-fronts. This fundamentally changed their species-wide psychology, and made them so that when they managed to regain tarflight, they were a nomadic and peaceful civilization. They still exist today, as the Remone Wanderers

A few million years after the Remone-controlled worlds were relinquished, many millions of intelligent species evolved and spread, creating a time of vibrant trade and culture.

After the Remone fell, hundreds of thousands of world which contained organic life, all inhabited and driven by the Remone were relinquished. Many sapient species evolved quickly, and due to the ruins of the Remone on the surface, grew to become star-faring tenfold faster than the average time. The aftereffect of this was a galaxy full of life, in all shapes and forms, but mostly organic due to the preference of the Remone to organic, eliminating all other types of life.

However, with a large population, they needed room. Slowly, over the course of a couple of million years, the species of the galaxy grew to encompass all available space, and were repulsed by the species in neighbouring galaxies. The result - war, famine, death and destruction. These lasted for ten million years, destroying nine-tenths of the life in the galaxy, and 1 out of every 2 planets.

After the wars ended, the survivors (the few that were left) saw the Zalanthium Galaxy grow remarkably close. After a million checks, double checks, triple checks, and more, they concluded that it would scrape by the closest edge to the Tarmalyula Galaxy, ripping off a load of stars and destroying they spiral structure. They were half right.

The collision age details everything that happened during the collision between the Zalanthium and Tarmalyula Galaxies, and directly after it.

At the time, the Zalanthium Galaxy and Tarmalyula Galaxy were almost identical, save for a few differences in star count. However, when the collision happened, the Zalanthium Galaxy ripped all the nebulae and large stars of the Tarmalyula galaxy, resulting in a lenticular galaxy populated mainly by old stars and dwarfs. The collision wiped every major world with life off the map.

In the following million years, nothing happened. The surviving species fled the galaxy, because it had no worth anymore. The galaaxy was filled with decaying husks of megastructures, stone tombs of ecumenopolis, and flying rubble of space stations. No life arose here again for half a billion years.

The Doldrum Era was mainly catergorised as a age were next to no stars formed, and life basically wasn't there. Planets were rare, and the signs of life from the Life Booming Age were finally destroyed, leaving an empty galaxy. Until the Zalanthi arrived.

The Zalanthi were defined as a multitude of species from the Zalanthium Galaxy, either fleeing or colonising the Tarmalyula galaxy. They filled the empty systems and colonised the barren worlds, until the galaxy was once again buslting with life. During this age, they multiplied the star-forming rate tenfold, to reach a rate that was only a percentage of the star forming rate of their homegalaxy, the Zalanthium Galaxy. This is the main reason there is now life in the galaxy, because they made the stars for it.

No-one knows why they left. But thy did. And they left their toys lying all around the galaxy. The stars that they made nurtured life on their new-formed planets, and when they acheived sapience and space flight, they found the toys.

The Tarmalyula Galaxy is a rather war-torn galaxy, with it's lack of habitable planets being a real concern to its civilizations. Below is a list.