Ever since its separation from the UFSS, the Thulcandran Federation grew to be very prosperous, seeing the area of Via Aurum as an immense source of resources and wealth for its people. It is now characterized by its massive industries, dense commercial sectors, and its high quality of life. The Thulcandran Federation has used this to construct a renowned market for travel, entertainment, and technological advancement. The nation's megastructures, which are primarily built around Via Aurum, are often seen as the symbol of the Thulcandran Federation. The high amount of national megastructures has also pushed for a large amount of advancements for resource collection within the nation. 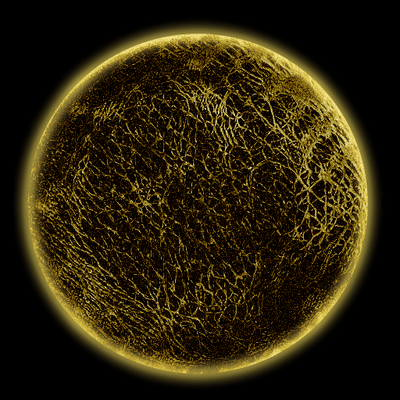 Thulcandria is a relatively large set of platforms and structures, built around a star which the first colonies of the Thulcandran Federation. The megastructure is known for housing a vast array of business, factories, and industries. It is characterized by its lively surface, which holds a large array of glimmering golden light from artificial light. Its layers are much the same, holding deep infrastructure in order to support the population. People are inclined to reside on the inner shells of Thulcandria, with the outer shells being more recent, holding less people. The population, as well as the large amount of energy that Thulcandria receives allows it to produce a large quantity of Carosi. Ever since it was created, Thulcandria has remained safe from all invasions, conflict, or civil unrest.

The government of the Thulcandran Federation also has an extensive network of surveillance, police, and military forces, which exist to uphold safety and the integrity of the government. Typically, they help monitor the population and try to work with federal entities to ensure a level of satisfaction and observation. This allows the government to retain control, without resorting to the use of wide-scale force. Monitoring in this method has allowed the Thulcandran Federation to remain stable and free from dissent. The police force also helps keep intranational affairs calm, with the military providing defense to worlds, corporations, and the government.

Diplomacy for the Thulcandran Federation's government is very straightforward, usually involving cordial trade to other nations. The receptiveness of the government to others stands as a reason for national economic prosperity. As such, the Thulcandran Federation has managed to become a heavy exporter to major nations. Most notably, the government has managed to take hold of a large portion of Commonwealth trade. It has used its resources and densely packed industries to create an incredibly efficient and profitable trading network. Other close trading partners include the United Federation of Star Systems, the Sovereign Provinces of Aylathia and the Quintet Payotari Association.

More standard diplomacy is brought in with an appointed group of diplomats, which are often assigned to specific regions or planets to manage relations between various governments. There are also many ambassadors stationed around the nation, who are tasked with handling the international relationships for the Thulcandran Federation. The lucrative image of the Thulcandran Federation has often made diplomatic meetings successful, as has a general level of respect for their nation. Diplomatic agreements are also common in order to secure additional sources of income, such as resource extraction and manufacturing. As a result, the Thulcandran Federation is known to have a very open relationship with the rest of the Local Universe.

The Judicial System of the Thulcandran Federation is advanced, holding a group of justiciar superintelligences and experienced ''National Judges''. These judges are able to assist the government in any court cases that involve a individuals or corporations. The judicial system also works in tandem with corporate officials, judges, and similar rule makers to ensure fairness and equality of the citizens. The government and the judiciary work together to ensure satisfactory rulings and punishments for those found guilty of crimes. While issues in the nation are usually resolved in lower courts, there are exceptions where the national level of justice is required.

The Thulcandran Federation holds an executive branch as well. It contains the president, their cabinet, as well as departments, federal agencies, and influence from corporations. The president is elected every fifty years, and has a term limit of two terms. The government's job includes the general management of the Thulcandran Federation and the execution of policies. The Executive Branch also handles the Thulcandran Federation's foreign relations and negotiations with the other nations. While the executive branch is able to enforce laws on corporations, it is not uncommon to see them working with the law to enforce guidelines or legislation.

The president of the Thulcandran Federation may also permit the use of the military if deemed necessary. In history, the military has not been used often, notably being commanded by the president during the Thulcandran War or the War of the Ancients, and with conflicts relating to the Celestial Plague. Colonization is also an ability granted to the president, who is also responsible for the administration and execution of new colonies. Colonies are usually designated to be created in existing territory, and are usually approved after a thorough investigation of potential land and resource value. The president is also able to help manage corporations, though it is an ability which is seldom exercised.

Initially, the Thulcandran Federation began as a colonial outpost for the United Federation of Star Systems. At the time, the UFSS had just created the Confederacy of Borealis with another nation named Vanaheimr. Seeking to expand the Confederacy's influence, the UFSS decided to send its first colonial missions to Aylothn at 31,471 CE. At this time, the Intergalactic Gateway Network was unable to be activated, meaning that the only way to travel to Aylothn was with standard FTL. As a result, colonial fleets were sent via the Warp Drive, a powerful FTL technology in its age. It would take several decades for the first wave of colonial ships to arrive at Aylothn.

Several other waves would arrive after a few more decades. In the mean time, the first wave would begin to inhabit a star system in the Via Aurum. It would be this star system that would one day house Thulcandria, the capital of the Thulcandran Federation. The UFSS would then go on to survey the area of Via Aurum, soon finding dilapidated wormhole gateways. It would also find a vast amount of resources, which was promising for future colonization. This discovery would later cause colonialists to gain their own independent power.

It would not take long before a semblance of separatism was made in the new colonies. While there was no major sense of independence yet, some felt as if the distance between the colonies and the UFSS would eventually cause them to break off. After a few more decades, the stagnation in new colonial fleets caused many to grow impatient with the situation. The lack of new colonists and pre-existing resources in Via Aurum also led to discontent among some of the colonials. They grew tired of waiting for new colony ships to come and found themselves increasingly frustrated by the UFSS. By the 32000s CE, new cultures had formed in Via Aurum, further separating the UFSS and the new colonies.

By the 32,500s CE, relative inaction and distance from the UFSS saw rise in a subliminal force of independence. Most, if not all colonies were self-sustaining. There also existed no efficient way to get to and from the Aylothn and Via Lacrimosa galaxies. Thus, it was inevitable for these organizations to become separate entities. Ideas for the Thulcandran Federation were born out of this movement to create a strong, prosperous nation in Via Aurum. A large fraction of the population sought to become distinct from the UFSS this way, creating a nation based around industry and trade.

Only two hundred years passed before the next major development of the colonies. While the UFSS was adamant on keeping their territory, the vast amount of people who wished for independence, combined with the distance between both areas, created a huge gap in leadership and communication. Years wore on, and by 32,738 CE the population began to defy orders from the UFSS, seeing themselves as a different entity. In that same year, the colonies would believe themselves to be fully autonomous, creating the first, but unrecognized, iterations of the Thulcandran Federation.

The UFSS would not take this lightly. Upon realization that their territories were becoming independent, they unilaterally decided to stage an invasion into Aylothn. The UFSS's goal was to regain control of the colonies, and prevent any further conflict with the Thulcandran Federation. This conflict was later named the Thulcandran War, which began in 32,741 CE. It would last for over sixty years, since the large distances between galaxies made it difficult for quick and efficient battles.

The UFSS was soon overwhelmed by the resistance of the Thulcandran Federation. They were unable to get close to Thulcandria before they were pushed back, losing ships and influence in the process. The UFSS attempted to regroup, sending more military assets, but the war appeared to be hopeless. Eventually, the UFSS retreated from Via Aurum, after a massive loss of personnel and spacecraft. By the year 32,805 CE, the Thulcandran Federation was the only remaining government in Via Aurum. It was later recognized after a treaty between the revolutionaries and the UFSS government.

War of the Ancients