United Nations of the Florathel Galaxy

United Nations of the Florathel Galaxy

The United Nations of the Florathel Galaxy (commonly known as UNFG, UNotFG, or simply the United Nations) is a military and economic international alliance located in the Florathel Galaxy consisting of many member nations, autonomous territories, and federal districts. With approximately 35 sexillion individuals, which populate every system in the United Nations' territory, the Nations is the most populous government in the Local Universe. The capital of the Nations is Astra, and the most populated state is the Cnara-Frealee Federation.

The United Nations of the Florathel Galaxy is an international union of nations that preserves good relations between the many states of the Florathel Galaxy. It mainly decides foreign policy and settles disputes between two nations, and citizens of each nation are elected to represent them in the Quorum of Nations. The UNFG have 143 different nations under its wing, all of whom have elected representatives based on population. The Quorum of Nations also passes laws that override the laws of individual nations where applicable and ensure that every citizen of every nation, biological, cybernetic, or virtual, gets what it needs to have a prosperous life.

The Government of the United Nations oversees many workings of day-to-day life in its territory, and is able to declare war on hostile nations such as the Somnar Hive, and mediate peace treaties between the nations under its wing and others. It also can control the national budget and authorize construction of major megastructures. 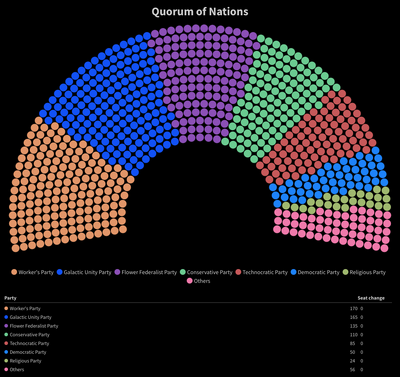 The Nations also have a large number of wormhole gateways throughout its territory, allowing rapid travel between all its domains, and some travel between the UNFG and its allied nations, such as the Union of Narenna.

The Florathel Core is the densest and most populated region of the UNFG, with the heart of the largest nation in the galaxy, the Cnara System, located in this region. It also contains the Providence Neutral Zone, a zone which every member nation of the UNFG has equal influence in, and also contains many different relics from the extinct Providence Union, and is as such a region that is heavily studied by scientists and historians.

The Frealee Arm is the second most populated region of the UNFG, and contains its administrative capital, Astra. It also contains many other major worlds, including Saleas, Darvikus, Frolira, Tuar, and others. It contains the heart of the Economic Federation of Saleas, and in its outer reaches, the Frolira-Tuar Interstellar Commune.

The Frealee Arm contains the largest proportion of UNFG Neutral Territory outside of the Providence Neutral Zone, which is in a different classification.

The Frealee Arm also contains a relatively high density of Aroteon Stars, a strange class of star which appears to have a wide variety of colors across its surface. Some of these are in UNFG Neutral Territory for study.

The Elerad Arm is the second arm of the Florathel Galaxy and second densest region of the galaxy. It is home to many nations, including the Marakat Interstellar Union, Trezhath, and more. The Outer Elerad Arm is notably depopulated due to the Sagittarium Invasions in the 20000s CE, and some of the other nations of the UNFG are trying to recolonize the vast empty areas in the Elerad Arm.

Today, some of the galactic disk globular clusters are controlled by Thalvett, a nation formed by the robots sagittarium left behind, to this day, and they have become significantly more peaceful, mostly just staying in their respective clusters.

The Elerad Arm is notably home to The Grey Star, an anomalous region of space roughly the size of a K-type star under heavy study by the UNFG, located in the territory of Trezhath.

The Galactic Halo is the sparsest region of the Florathel Galaxy, containing an area twice the size of the Florathel Galaxy proper, but with only twenty billion stars. The Galactic Halo is officially fully controlled by the nations in the galactic disk, but they don't administer this claim, and the Kingdom of Saihera controls just over 1/4 of it. The only other nation to properly control a significant part of it is the Pecay-Po Federation of Nalachi, a reclusive, ancient nation that has only recently agreed to join the UNFG, located in the Nalachi Cluster, one of the many globular clusters scattered through the Galactic Halo.

Nellai's object is a strange galaxy. It is absolutely miniscule, at just 850 light years across, but it contains around 23 million stars. Nellai's object is also a quasar, emitting high-energy radiation in two opposite directions. It is currently going through an intense starburst spree, forming at a rate of 430 stars every year. Nellai's object is intensely pink, with hints of blue, green and red across its strange filaments of gas, which almost resemble spiral arms. Over a million OB stars, over 30,000 Wolf-Rayet stars and over 1,000 aroteon stars have been documented in Nellai's object, and it is currently the most inhospitable known galaxy in the Florathel Galaxy's systems. Fortunately, in around 20 million years, Nellai's object's starburst phase will end, but the "galaxy" will still be extremely dense and quite inhospitable. It is a distant satellite of the Florathel Galaxy.

Although the UNFG nominally controls the whole galaxy, this control is only really exerted at Nakuvoas itself and its immediate surroundings, meaning that many criminals choose to hide in this dangerous environment. However, no one really lives here so there isn't really an urgent need to flush them out, nor is it really possible.

The UNFG contains many different major worlds, including industrial hotspots, population centers, and capitals. Others are historically important and are preserved for historical study.

Foreign policies and diplomatic relations of the United Nations are highly oriented around trade, protection, and co-operation. The UNFG is known to be very xenophilic, which uses a selection of carefully designed diplomats and has a focus on teamwork in nations it is allied with. Diplomatic relations with the UNFG also ensure a strong and rapid development of the nations involved. There are also many worlds dedicated to being embassies for various nations, with a large number of diplomatic and cultural sites. These are often spread across the local universe, giving the UNFG outsized fame, and some consider it a great power on the level of the Confederacy of Borealis and Commonwealth of Aggregate Aylathiya.

Union of Narenna
The Protea (symbol ₴) is the official currency of most member states of the United Nations of the Florathel Galaxy as well as some non-UNFG states by monetary agreement. This region is known as the Protea area and includes over half of all nations within the Florathel Galaxy. The Protea, divided into 144 petals, is the second largest and second most traded currency in the universe after the Carosi.

The currency is also used officially by the institutions of the UNFG, by eleven states that are not UNFG members, as well as unilaterally by the Beltamar Union and Union of Narenna. Additionally, almost 500 octillion people across Florathel Subcluster use currencies pegged to the Protea.