The planet Vesroth seen from orbit

"It's hard to believe that a dustball like this could have given rise to that lousy son of a bitch."

Vesroth is a planet located in the Verpletter region of Via Aylathiya, hidden deep within the Karuva Nebula. It is a barren, near-lifeless world covered in scars from the countless conflicts fought there. Large craters dot the surface of this world, usually caused by the Golden Hand Syndicate's weapons tests. The planet is surrounded by rings of asteroids, which the Syndicate mines for their rich minerals, although they do occasionally fall to the surface.

Originally a far-flung military outpost belonging to one of Verpletter's various nations, the planet was eventually abandoned when the conflict was over. However, the planet would eventually see new arrivals. A colony ship passing by the planet suffered serious malfunctions and had to make an emergency landing on its surface. Upon crashing on Vesroth, the survivors found that they hand no way of getting back into space. Arguments arose as to what they should do, which eventually spiraled into all-out violence.

Eventually, the survivors banded together into multiple groups and spread out all over Vesroth, taking whatever they could carry from the wreck of their ship. These groups, now called clans, warred amongst each other for whatever scraps of technology they could get a hold of. It seemed as if this would go on for an eternity, but everything changed when the stranger showed up.

This man, who would come to be known as Konrad Sicallion, seized control of the clans on the planet uniting them into a singular force. When all the clans were united, Konrad called together a council to decide what they should do next. Upon discovering the derelict space station orbiting above Vesroth, they decided to make it their new home. They moved everything off of the planet and into space, leaving Vesroth empty once again.

The world of Vesroth has always been seen by the rest of Verpletter as a wasteland, little more than a footnote in the annals of history. However, its remote location means that it would serve as a potential base should the need arise, and for a time, it did. One of Verpletter's warring nations seized the world for themselves, turning it into an outpost and constructing a station in orbit. However, the conflict they were fighting never reached the Karuva Nebula, so they decided to abandon the planet, leaving the orbital station to rot. 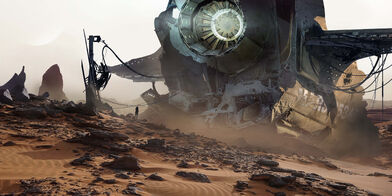 For a time, Vesroth would see an extended period of isolation, not being colonized by any of the nations of Verpletter. Soon though, this period of silence would come to an end in the form of a desperate survival attempt. The Voyager, a colony ship searching for a suitable planet to colonize suffered severe malfunctions during a warp jump, forcing it to jump out of warp near Vesroth. In a desperate attempt at survival, the captain of the Voyager performed an emergency maneuver by landing the ship in the Vesrothian highlands.

Most of the colonists were able to survive the crash, but they found themselves stuck on a barren planet with next to no resources. Banding together, the colonists set about trying to repair their damaged craft. However, they discovered that they lacked the means to repair the ship's main drive, leaving them stranded. Realizing this, the colonists set about trying to make the most of their new lives. For a time, they were able to sustain themselves, producing food via the ship's onboard growth bays and leeching power from the reactor. Despite this, they knew that this would not last, and whatever power they had would eventually run out. Many arguments arose debating on how to deal with this issue. One night, a particularly heated debate resulted in a firefight. Several colonists were killed in the ensuing violence.

After this event, the colonists decided that staying in the wrecked Voyager would not work, they would need to leave. They formed into several groups and went their separate ways, scattering all across Vesroth. They would try to harvest materials from the land around them, but found that said materials were of low quality. The only chance at harvesting anything good was when one of the mineral-rich asteroids from Vesroth's rings fell to the surface. Running low on supplies, the survivors soon found that the best way to get by was to steal resources from other groups. At first, these supply raids were small in scale, but they eventually spiraled into full-on warfare.

The various survivor groups across Vesroth soon came to be known as clans, adopting a far more militaristic nature. Large-scale conflicts broke out all across the planet, clans fought and absorbed each other only to break apart the next day. The surface of Vesroth became covered in battle scars, scorched landscapes, and enormous bomb craters. It would seem as if this state of constant conflict would go on forever. However, everything changed when the stranger showed up.

Konrad Sicallion, as the stranger came to be known, decided to end the constant state of war once and for all. After seizing control of the local Bloody Hands clan, he set about conquering all the tribes across the planet. After a long and grueling campaign, which brought unheard of levels of devastation to Vesroth's surface, Konrad had finally brought the last of the clans under his command. Vesroth was now under his control. Despite his newfound victory, Konrad knew that his people could not stay on Vesroth forever. They would have to leave, and quickly. Seismic scanners indicated that the planet would soon be experiencing a massive earthquake within a year, one that Konrad and his men would most likely not survive. He and his highest ranking troops debated on this issue for a while. Eventually, they decided to send out scouting parties to search for areas which could possibly survive the coming earthquake.

After weeks of searching, it seemed like all hope would be lost. However, one scouting team returned with news that would soon change the clans for good. An abandoned space station had been detected in orbit above the planet, one that could potentially be their salvation. However, they had no craft capable of space flight, and the Voyager was still a wreck. Seeing the old ship as the only chance for survival, Konrad ordered his men to repair it as quickly as possible. After months of hard work, the Voyager was finally repaired enough to get to the station. After packing everything they could onto the ship, the clans set off on their ramshackle ark towards their new home. Despite the ship barely holding together when leaving Vesroth's atmosphere, it was able to hold enough to break into space and reach the old station, leaving Vesroth empty once more.

The Skid is a large ravine located near Vesroth's equator. It stretches over 43 kilometers (26.7 miles) long and reaches 5 kilometers (3.1 miles) deep. It is regarded as being particularly difficult to travel through, especially due to the frequent landslides. It is also the home of large, carnivorous insectoids known simply as "spuzzers". They are two-and-a-half times bigger than a Human, covered in a tough exoskeleton, and are armed with powerful mandibles which can deliver potent venom. Despite their dangerous qualities, their meat is regarded as being quite delicious, so the Syndicate often makes trips down to the surface to hunt them.

The ash wastes are a region in the northern reaches of Vesroth, close to the pole. Commonly referred to as the harshest region on the planet, It is a bleak expanse of darkened sand and weathered stone. Enormous dust storms often form in the region, blanketing anything in its path. The ash wastes are also home to Vesroth's only volcano, known as "The Burning Maw".

The highlands are a series of plateaus situated in the eastern half of Vesroth. They stretch out for miles in all directions, forming a landscape reminiscent of a gigantic staircase. It was here that the Voyager crashed during its emergency landing. It was regarded as the best place to land due to the region being relatively safe when compared to the rest of the planet. Large gastropods known as "boulder snails" roam across these lands, searching for minerals to eat. Their shells are known for being so difficult to crack that even armor-piercing weaponry has difficulty punching through them.

Thunderhowl Peak is the tallest mountain on Vesroth. It stretches over 13 kilometers (8.1 miles) tall and the peak is shaped vaguely like a lightning bolt. It earned its name by being in an area known for its frequent lightning storms. Whenever a lightning bolt strikes the mountain, it produces a sound not disimilar to that of a howling wolf. It is so loud that the sound waves are known to travel all over the planet.