High
Yokata is the gas giant's Yohira's second major moon, located in the Terran Bubble's Ralis System and under the jurisdiction of the United Terran Federation. Yokata is the only moon in the Ralis System with an atmosphere that is denser than Theras'. Furthermore, it is one of the few bodies in the Ralis System to support sophisticated multicellular life, which is mostly found in its vast lakes of liquid methane, but is also present on its surface and in its subglacial water oceans. The discovery of these alien habitats fundamentally altered humans' concept of life in the Terran Bubble, as much information of such ecosystems had been lost throughout the many generations that people had been stranded on Theras.

Yokata is regarded as one of the most vital worlds in the Ralis System, as it contains numerous bodies of liquid ethane and methane, making the moon one of the principal producers of spacecraft fuel. As a result, despite appearing to be somewhat minor at first, it is a very powerful world economically. Yokata is also the sixth most inhabited body in the Ralis System, with a permanent population of roughly four billion on its surface and seven billion in orbit. During the Great Purge, when one of the Ralis System's population centers was destroyed, Yokata experienced significant population increase as people flocked to nearby worlds. The moon's population's growth rate has always been very high in contrast to other worlds, with no acceptable explanation ever provided.

Yokata was always regarded of as an intriguing and strange place that attracted people's curiosity to the fullest. Many remote-controlled probes and drones were dispatched to Yokata by early Terran Civilization's space programs as a result. Though biological signals in the bodies of liquid ethane and methane on the surface confirmed life, visible evidence came several decades later, when Cooper Marigold, the first human to set foot on Yokata, opted to take a deep dive into a lagoon. Cooper had always had a fascination with Yokata, eventually becoming so enthralled by it that he dedicated his life to one day visiting the moon. He did so during the Hypnos V mission, in which fifteen daring astronauts and researchers set out on a six-year-long trip to Yokata.

During the Ether War, Yokata was briefly occupied by the Dictatorship of Tyvus, which greatly relied on its natural resources to sustain its enormous starfleet. This era lasted around two months, and throughout that time, the dictatorship attempted to impose its heinous tyranny on the rest moon but the people refused. This is one of many examples of the UTF's common people's fortitude, resiliency, and bravery in risking their lives to liberate others from a self-destructive and tyrannical system. The people's resistance eventually drove the dictatorship forces to retreat, which was a major turning point in the Ether War, for if it had failed, Theras would have been overtaken by the dictatorship, triggering a chain reaction of destructive events that would have transformed the Terran Bubble into a dystopic wasteland.

Yokata orbits a million and two hundred thousand kilometers from its parent gas giant Yohiri in a nearly circular orbit that takes sixteen days to complete. The orbital plane of Yokata is inclined 0.243 degrees relative to the Yohirian equator, and its orbital eccentricity is 0.0142. Yokata has the same rotational period as its orbit and thus is tidally locked to Yohiri, with one side permanently facing the planet.

Yokata is orbited by Yokata-K1, a tiny, recently captured asteroid sub-moon. The sub-moon, which is orbiting from a distance of a few thousand kilometers, is expected to crash into the planet as its orbit decays further with each rotational cycle, eventually resulting in a thin ring system around Yokata, which should collapse. Fortunately, corporations are expected to have thoroughly mined the moon by that time.

Yokata's topography is mostly flat, with a few mountains and some hilly spots scattered about. Yokata's surface is generally devoid of impact craters, as meteorites, asteroids, and other cosmic objects typically disintegrate into minuscule harmless particles due to the moon's dense atmosphere. Water ice, hydrocarbons, and minor amounts of methane and ammonia ice make up the majority of Yokata's surface. Many darker places, especially around the equator, have significantly higher levels of 'sand particles. These were formed when liquid methane rained on the water-ice bedrock and eroded it, or they have come from tholins.

Yokata is the only body in the Ralis System with natural liquids on its surface, which come in the form of hydrocrabons such liquid methane and ethane. Thousands of smaller lakes, rivers, and similar pools of hydrocrabons dot the landscape, but there are only three large seas. The majority of Yokata's strange lifeforms live in these hydrocarbon pools, which range from small plankton-like organisms to complex multicellular critters. In addition, hundreds of kilometers beneath Yokata's icy crust lies a massive subsurface ocean, which is home to thriving alien ecosystems.

Yokata receives only around 1% of the sunlight that Theras does. The average surface temperature is -170 °C, however it has ranged from twenty degrees degrees higher to thirty degrees lower at occasion. The presence of methane in the atmosphere creates a significant greenhouse effect, keeping the surface of Yokata at a substantially higher temperature than would otherwise be the thermal equilibrium. Yokata's haze contributes to an anti-greenhouse effect by reflecting sunlight back into space, causing its surface to be substantially colder than its upper atmosphere. This partially compensates for greenhouse warming by keeping the surface somewhat colder than would be predicted from the greenhouse effect alone.

Yokata's atmosphere periodically rains liquid methane and other organic compounds onto the moon's surface. The number of methane lakes visible near the south pole is decidedly smaller than the number observed near the north pole. As the south pole is presently in summer and the north pole in winter, it indicates that methane rains onto the poles in winter and evaporates in summer. In addition, there are many ravaging dust storms on Yokata, created by the tidal forces of Yohira affecting the moon.

Yokata is home to various diverse ecosystems of life, yet no sentient societies of any kind have been discovered. This life, categorized as exotic life, is based on carbon yet uses hydrocarbon as its solvent, giving them fundamentally different biological features than more prevalent water-based organisms. These unique lifeforms' cells on Yokata are several times larger than their counterparts on Theras-like worlds, and their metabolism is slow, which extends their lifespans.

Breathing in high-energy acetylene from the atmosphere, as well as hydrogen, and exhaling nitrogen is characteristic of the respiration process. This is not accurate for animals in the subsurface waters which have significantly more distinct and complicated breathing systems, however. Many lifeforms obtain their energy from photosynthesis, while others rely on more exotic mechanisms. Many biological entities, of course, do not generate their own energy.

A vast subsurface body of water slightly mixed with ammonia and organic compounds resides several hundred kilometers underneath Yokata's alien surface. This subglacial ocean is fifty kilometers deep on average, with tremendous pressure at the deepest depths. Many hydrothermal vents on the seafloor spew organic chemicals into the water, giving birth to single-celled lifeforms that gradually developed into more complex ones, making the subglacial ocean the most active zone of the world. Yokata's equator is surrounded by a wide network of thermal vents, which greatly contribute to the area's biodiversity.

There are several aquatic outposts that are either tethered to the ice layer encasing the subglacial water or anchored to the seabed under crushing pressures. As of today, there is no permanent population in Yokata's subglacial ocean, yet over ten thousand biologists and experts are continually researching to learn more about Yokata. Plans to open public facilities in the subglacial waters have been proposed, but have yet to be approved by the local government. There are plans in 2,022 TF to begin construction of an immense arcology tethered to the seabed, capable of housing several million people and connected to the surface by hypersonic lifts. 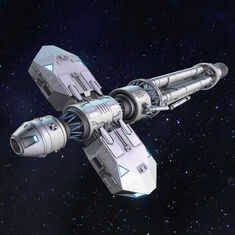 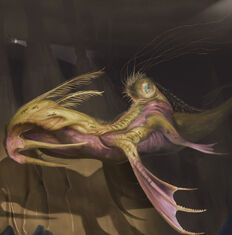 An exotic lifeform in the lakes of liquid methane and ethane 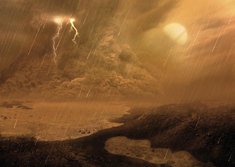 An artist's conception of Yokata's surface

The alien surface of Yokata

A lake of hydrocarbons on Yokata
Community content is available under CC-BY-SA unless otherwise noted.
Advertisement